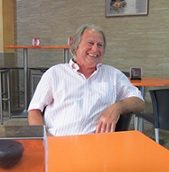 A photographer and union stalwart who served a weekly newspaper for 34 years has died aged 73.

Tributes have been paid to Michael Reilly, who worked for Tweeddale Press Group title the Berwickshire News between 1976 and his retirement 2010.

Michael, pictured, also “flew the flag” for Berwick and Borders journalists at Scottish executive council meetings of the National Union of Journalists.

A tribute piece on the NUJ’s website described him as having a “steely determination”, although it was his “calm, measured tones which contributed most in discussions.”

John Toner, NUJ Scotland national organiser, said: “Michael was a quietly spoken man, who spoke succinctly and only when he felt a point had not been made by someone else.

“Because of this, we were always attentive to his wise words.

“He will be remembered fondly by all of us who had the pleasure to know him.”

Michael died on 16 August and his funeral was held on 28 August.  He is survived by wife Aileen, and children Jamie, Sarah, Emma and Alex.