A weekly newspaper has made a front page plea for action to end the “traffic chaos” on the industrial estate where it is based.

The Northampton Chronicle & Echo has called for a solution to congestion on the Brackmills Industrial Estate, in Northampton, which is home to its Pavilion Way office.

Around 14,000 people work for businesses on the estate, but the Chronicle & Echo says those commuting by car face having up to an hour added on to their daily journeys due to “gridlock” caused by even “the slightest issue” on the nearby A45.

In a front page comment, the Chronicle & Echo said the situation was “only going to get worse” thanks to a plan for 525 new homes to be built nearby. 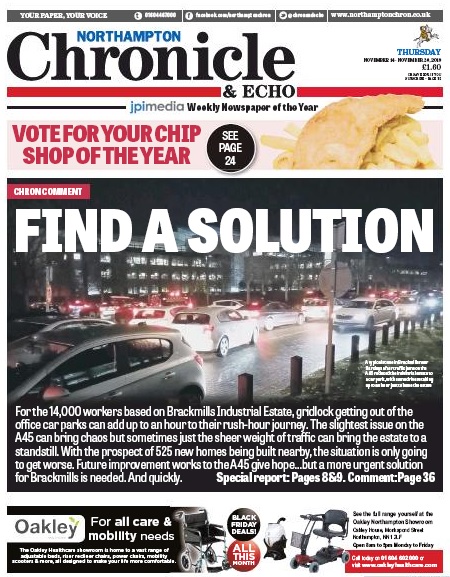 Reporter Carly Roberts wrote : “Another day, and commuters should expect another traffic nightmare when leaving the office at 5.30pm to get home to their loved ones from Brackmills Industrial Estate. For the 14,000 people working in Brackmills, trying to get out of the business park in under 10 minutes is something to be laughed at.

“Alan Smith, who works for T&W Civil Engineering, had a typical story to tell. Last week his trip home took him an hour and 20 minutes to get to nearby East Hunsbury. According to Google Maps, on a clear day, that trip should take six minutes.

“The Chron has this week called on Highways England, Brackmills BID and Northamptonshire County Council to find a solution to the ongoing problem on the business park.

“At this point, we will declare an interest. We are based on the park as well, along with thousands of other employees of different companies.

“A point continually raised by employees on the park is the issue of the single-lane traffic outside Barclays, in Pavillion Drive, and the limited access points. It is more often than not gridlocked… and uncontrolled, with motorists driving on the wrong side of the road in a bid to beat queues.

“There has to be a review of the traffic issues with recommendations for short and long-term solutions. And, it has to be done quickly.”