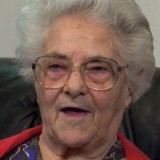 A weekly newspaper has launched a new video series telling the stories of its older readers about their lives on its patch.

The Tamworth Herald has created the online archive which it hopes will benefit a younger generation.

The Herald is now appealing to people over 60 who have lived in the Tamworth area since childhood to come forward for the project.

The first video in the series is now online, and features 88-year-old Madge Jackson, pictured.

Herald news editor Helen Machin said: “Madge is a wonderful storyteller with a whole host of memories to share; it all makes for interesting viewing and we are delighted to be working alongside a local professional for this new online feature, which we hope will be a regular slot.”

The films are being produced in association with production company Eternity Videos.

Filmmaker Barry Wale said: “It’s a real privilege to be working alongside the Herald on this project. This is the newspaper I grew up with and has been in the family home for as long as I can remember – and it still is.

“Eternity videos was created to give others the same chance that I had in recording a loved one on video for posterity. I interviewed my own parents and they were so pleased to tell their story, their way.

“Sadly, I lost my mother shortly afterwards, but after her funeral I was able to edit a full-length documentary about my parents’ lives, told in their own words.

“It’s an honour now to be able to give other people the same opportunity to record their loved ones for eternity.”