A weekly newspaper let its readers decide on the best way to honour a music legend from its patch following his death earlier this week.

The Essex Chronicle ran a poll offering two choices for a special front page commemorating the life of Keith Flint, frontman of The Prodigy, who was found dead at his home near Great Dunmow on Monday.

More than 5,500 people voted in the survey, conducted on the Facebook page of the Chronicle’s Essex Live sister website.

An image of Mr Flint smiling backstage before a show, pictured below, was chosen following this morning’s 11am deadline as the “clear winner”, with 66pc of the vote. 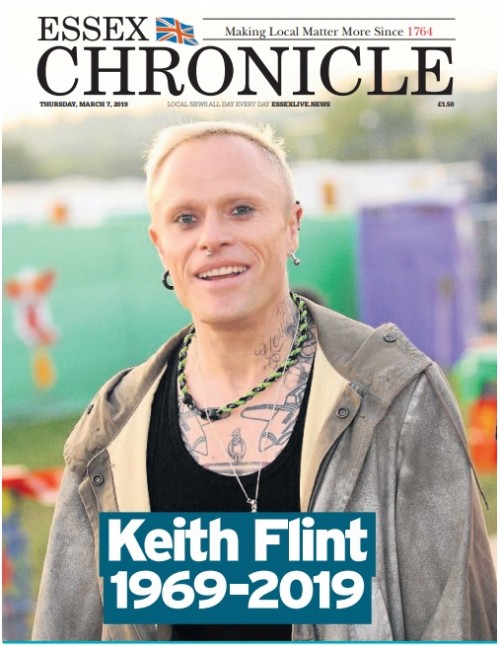 Alan Woods, Reach plc’s brands editor for Essex and Hertfordshire, told HTFP: “I knew we had to splash on Keith’s death in the Essex Chronicle, as Keith went to school five minutes from our office and lived on patch for most of his life.

“Love him or loathe him, he was one of our county’s biggest musical success stories. The question was how we should represent Keith on the front page.

“There were clearly two sides to Keith; the terrifying frontman who owned the stage in his live shows with The Prodigy but in reality, he was a much gentler and quiet man.

“So which of the two should be the Keith that graced the newsstands? I made the unusual decision to ask our readers how our commemorative edition should look.”

The poll was published on Facebook on Tuesday evening.

Alan added: “I thought we would get strong engagement on the post but I never expected quite the reaction we had.

“By the time we cut the vote off, at 11am on Wednesday, we had 5,500 votes and a very clear winner. A shot of Keith, calmly posed backstage before a show, was what the readers wanted.

“I think it was brilliant to involve our readers in the way we did and I hope that they will support the commemorative edition by picking up a copy tomorrow.” 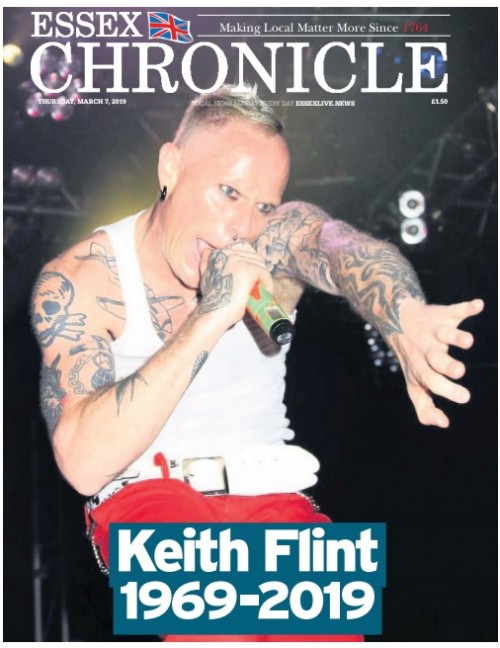 As well as designing the front pages, Darryl wrote a personal tribute piece to Keith for the Chronicle and Essex Live.

He wrote: “I think the reason that so many people are so upset by his death is that he felt like one of us, an ordinary Essex bloke who made the most of himself and lived life to the full.

“Like most of us, he wasn’t an exceptionally gifted musician or an amazing singer – but, boy, was he an incredible showman.

“Snarling and shouting, preening and pouting with his fellow vocalist and partner-in-crime Maxim, he was ‘the show’ while Liam conjured up the most infernally memorable tunes.

“I didn’t know him but a lot of my friends and friends of friends did. They all testify to the fact that underneath the piercings, dyed hair and aggressive stage persona was a lovely, sensitive, articulate guy.”