A weekly newspaper has publicly hit out at accusations it publishes “fake news” – along with seven other “myths” about its journalists.

The Derbyshire Times is hoping to debunk “frankly stupid” rumours about its practices after publishing an article online aimed at “setting the record straight” with the more critical elements of its readership.

Run under the headline ‘Eight myths about the Derbyshire Times which are quite frankly stupid’, the Chesterfield-based Times declared it was “time to debunk the silliness once for all”.

It addressed claims that the paper publishes “fake news”, that it has a political agenda, and that its journalists “never leave the office”, among others. 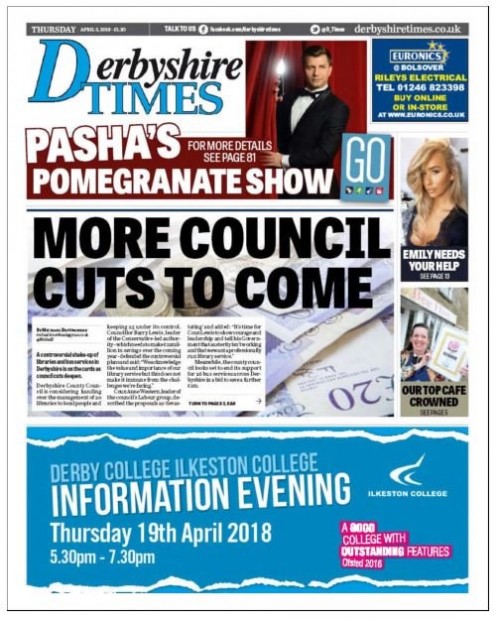 The Times has so far declined to comment further on the piece, written by journalist Sophie Wills, or explain what prompted its publication.

The eight “myths”, and their accompanying explanations, are as follows:

– We don’t report good news
This one leaves us scratching our heads on the daily. Do us a favour – don’t jump on the bandwagon! Take a sec to flick through the paper or scroll through our feed. You’ll find it’s brimming with positive stories.

– We don’t support local businesses
Rubbish. Not only do we have a fantastic monthly business supplement, in this week’s DT we’re highlighting the area’s top small and medium-sized enterprises. We also recently the Love Your High Street campaign.

– We’re not allowed to publish the names and addresses of criminals
Unless reporting restrictions are in place, we will report the names, addresses and ages of defendants who appear in court and are permitted by law to do so. It is important to report these details for identification purposes.

– Our journalists never leave the office
You’ll find reporters visiting schools, representing the paper at events, selling poppies in November and raising money for charity. We attend court, inquests, crime scenes and council meetings most days. See you round!

– We have a political agenda
Nope. Our newspaper is impartial and does not support any particular party, despite what some people may claim. We strive for balance and to represent both sides of the story so our readers can make up their own minds.

– We publish fake news
It’d be fun to doss about making up stories for a laugh but we can’t. We obtain info from trusted sources and have to adhere to strict guidelines. And for your information – just because you don’t agree with a story doesn’t mean it’s fake news.

– We don’t have Chesterfield’s best interests at heart
Nobody wants to see Chesterfield thrive more than we do. We might report on the good and the bad, but deep down we’ll always be rooting for this little gem of a town. So there!

The piece received a mixed reaction on Facebook after the Times linked to the article with the caption: “Right, you lot- we’re setting the record straight…”

Reader Joel Robinson added his own ‘myth’ suggestion: “The Derbyshire Times website isn’t powered by hamsters. It’s slow due to all the syndicated news, third party advertising and bad design.”

Louise Rogers wrote: “What can I say, a lovely way to address your not so loyal readers ‘right, you lot’. If you have to justify your existence you have a problem. I must admit the I only still follow for the laugh.”

But Alan Walker said: “Don’t worry DT, people just love to moan. Most of those who whinge don’t unfollow you so [I] can only conclude they do it for likes.”