A weekly newspaper has denied having “sour grapes” about the result of a football match after attempting to get an explanation for why a penalty shoot-out was moved.

The Doncaster Free Press had tried to get Charlton Athletic to explain their reasoning for moving the shoot-out away from the end where travelling Doncaster Rovers supporters had been based during the pair’s League One play-off semi-final earlier this month.

Athletic had cited “safety reasons” immediately after the match for moving the deciding shoot-out, but the club have since failed to expand on the grounds for the switch.

Matchday safety officers were seen on television telling referee Gavin Ward, pictured below, to conduct the shoot-out at the home end of The Valley stadium, which the home side won 4-3 to beat Rovers. 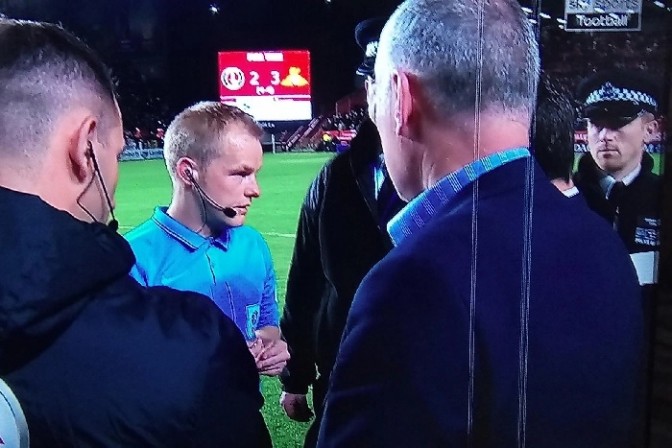 The Free Press contacted Athletic last week and asked them to outline exactly what “safety reasons” were behind this decision, who had made the decision and whether both teams and the referee had been aware of this prior to the match taking place.

The paper subsequently published a story about Athletic’s failure to respond to its enquiry, which prompted fans of the London club to react on Twitter in defence of the decision.

Free Press sports writer Paul Goodwin told HTFP: “Quite a few Charlton fans thought it was ‘sour grapes’ on our part but we’re not suggesting the result would have been any different or making excuses.

“All we wanted – as did lots of people from Doncaster and many neutrals too – was an explanation of the ‘safety reasons’. We’ve heard reports from fans suggesting there was a bit of bother between home and away fans at the other end of the ground and concerns about a pitch invasion – which ultimately happened anyway.

“Charlton have had a busy week preparing for the play-off final but it’s strange they have not commented and nipped it in the bud. I do find it baffling that any league club should not be able to safely administer a penalty shoot-out at both ends of their stadium, especially when the stakes are so high.

“The lack of response just leaves a question mark hanging over the incident.”