Two sister weeklies have moved into a new home after a newspaper office of more than 170 years was declared “no longer fit for purpose” last year.

HTFP reported in September that Newsquest’s Trowbridge centre, pictured, home to the Wiltshire Gazette & Herald and the Wiltshire Times, had been touted for closure.

The papers’ editorial department has now moved to a modern office the White Horse Business Park in North Bradley, on the outskirts of Trowbridge, while Newsquest says reporters will “increasingly spending more time out in the towns they cover”.

Advertising queries will now be handled via telephone at the office of sister daily the Swindon Advertiser. 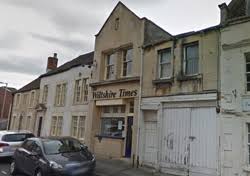 Pete Gavan, who edits both titles, told readers: “We feel this is the best way for our reporters to keep in touch with the local news in the towns we serve.

“You will now see your local reporter more often working in town centres, meeting people for surgeries in libraries and so on and hearing your stories.

“We also hope to use some of the community campus’ and hubs in Corsham, Pewsey, Devizes, Chippenham and Calne.

“Many of the paper’s advertising team already spend most of their working day on the road, visiting clients.”