A regional news website published a video of a sailor attempting to insert a pool ball into another man’s anus in order to combat accusations that it was reporting “fake news”.

Footage of the “vile act”, allegedly involving current Royal Navy servicemen, was uploaded to Cornwall Live as part of the site’s bid to quash rumours about the veracity of the video which had been reported elsewhere.

An initial story by the Daily Mail had reported that the 10 sailors faced serious disciplinary action over the incident, which is said to have taken place at the Red Lion pub, in Helston, on 24 February.

The pub subsequently released a statement claiming the Mail’s story, which was followed up by Cornwall Live, was “close to 100pc untrue”. 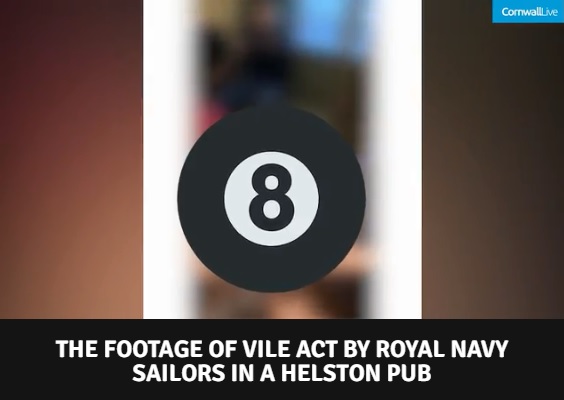 A screenshot of the edited video published on Cornwall Live

But, in response, Cornwall Live said footage of the incident which it had been sent clearly showed the participants engaging in “indecent, extreme and inappropriate” acts.

The site described the two men’s colleagues laughing as one attempts to insert an eight-ball from the room’s pool table into the backside of another, although it used a graphic of a pool ball to obscure the actual act itself.

In a story accompanying the footage, it added: “Cornwall Live has decided to share the video due to the conflicting reports of the events and lack of verified information from the authorities who would not comment on the specifics while their investigations are ongoing.

“But we have disguised it so that the images cannot be distinguished and the sound can be heard, with swear words and names bleeped out.”

Both Devon and Cornwall Police and the Royal Navy confirmed they are investigating the incident, but the latter has declined to comment further on the matter.

“Cornwall Live was being slammed for running ‘fake news’ and I wanted to quash that as quickly as possible once we had the footage.

“Interestingly, despite taking great care to censor the content of the video as much as possible and explaining why, there was further criticism over the alleged acts not being properly visible.”