The local government watchdog has refused to investigate a county council’s decision to bar a regional daily journalist from a meeting.

The Local Government and Social Care Ombudsman has rejected a complaint from the BBC’s local democracy reporting service and the Nottingham Post about Nottinghamshire County Council.

HTFP reported in September how the council had banned Kit Sandeman, the Post’s local democracy reporter, from a meeting about the planned creation of a so-called ‘super council’.

Despite the ban, Kit was later able to exclusively reveal the discussions which were had after obtaining leaked documents from the meeting. 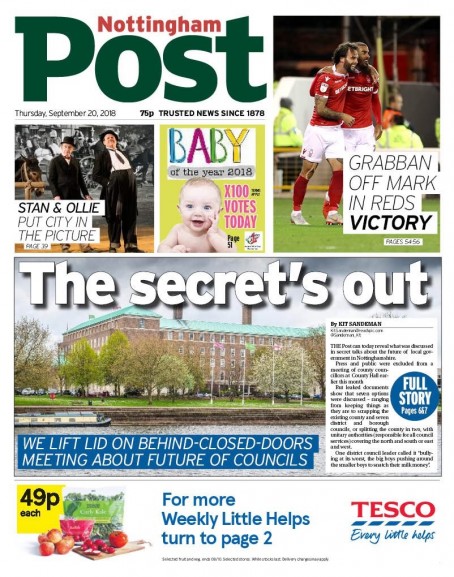 In the ombudsman’s report on the complaint, the LDRS is referred to as Mr X, and the meetings are named CPWG, short for cross-party working group.

The report states: “I do not see we could achieve a meaningful outcome for Mr X’s complaint now that the CPWG has been disbanded and there will be no further meetings. In addition, Mr X has been able to obtain documents from the meetings which have taken place, from another source.

“So this appears to have substantially mitigated any injustice he suffered as a result of being denied access to the earlier meetings.”

It concludes: “The ombudsman does not have grounds to investigate Mr X’s complaint that the council had unreasonably refused him access to the meetings and records of a councillors’ working group.

“This is because we could not achieve a meaningful outcome for Mr X now that the group has been discontinued.”

The ‘super council’ proposal, which would have seen Nottinghamshire’s district and borough councils dissolved and a brand new unitary authority formed, has since been scrapped.

The council has now launched an independent review into whether similar types of meetings should be held in public in the future.

The authority’s leader Kay Cutts told the Post: “I welcome the ombudsman’s consideration of this matter although it is unfortunate that, due to the circumstances, no firm ruling has been reached.

“The council is committed to the principles of openness and accountability and encourages the public and press to attend meetings and take an active interest in how the council works.

“This is demonstrated through our use of a committee system of governance, which allows for greater public scrutiny of all decisions and the greater involvement of all councillors from all parts of the county and all political persuasions in public debate and decision making.

“Just like any business, organisation or government body, there will be occasions when we need to do work behind the scenes and hold discussions in private. This is particularly so during the development of new plans or policies – until the point when we are in a position to present those plans or policies for debate and make a democratic decision on them, in public.”