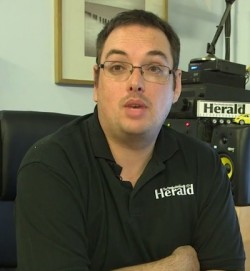 An editor who owes thousands of pounds to creditors, including journalists who have worked for him, says he will pay up after his behaviour was branded “outrageous” by union chiefs.

Thomas Sinclair, who runs the Herald group of newspapers in West Wales, has defied court orders over money owed to people including reporters and photographers.

But Thomas, pictured, has told BBC Wales he has now secured a new £1.5m investment which he claims will allow him to repay everybody, including six former employees, as well as creating up to 10 new roles.

He also told HTFP that he was no longer the owner of the Herald group and that its ownership has been transferred to Herald News International Inc., a new company which he says was incorporated in the United States earlier this year.

Speaking to the BBC, Thomas admitted he “made mistakes” but insisted those he owed money to would be repaid.

He added: “We launched a fourth newspaper, the Ceredigion Herald, and really that was a bridge too far for the newspaper group.

“It didn’t make money – it lost an awful lot of money – and left us in a situation where almost the whole group collapsed and we would have been left with no newspapers at all.

“We have paid off quite a lot of the staff that were owed money from the past.”

The National Union of Journalists has said the way journalists, photographers and communities have been treated by the Herald is “outrageous”.

“Having to go through the courts to try and seek redress for wages they are owed, for work they have created and produced, in and of itself is disgusting.

“But the fact that despite court judgements they haven’t actually been paid what is due to them is particularly repugnant.”

Among those owed money is Alan Evans, editor of hyperlocal website Llanelli Online, who is yet to receive £6,500 for freelance work carried out for the group.

Alan pursued Thomas through the courts and sought to stop him from allowing his company to close in order to avoid paying his debts.

He added: “We have been quite insistent that he can’t do that, that he has to file accounts and has to pay his debts before he dissolves the company.”

However the company says its new backers, which include investors from the UK and overseas, including one from Oman, have enbled it to make a fresh start. 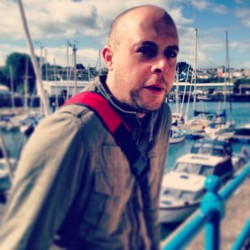 Managing director David Lee told HTFP: “I agree wholeheartedly with Michelle Stanistreet from the NUJ that a small number of former members of staff were treated badly. This was due to the failure of the previous business running the newspapers.

“However, we started again – and two years on, we have finally managed to raise the capital needed to both pay debts from the past and to invest in local journalism for the future.

“This £1.5m is a huge boost for a company running small community newspapers such as ours and will allow us to remain in print for a number of years.

“It will also protect an existing 25 jobs and create a further 10 as we invest in news provision in west Wales.”