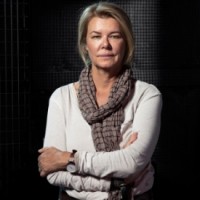 Two-thirds of journalists who sat their senior examinations in the past year achieved passes, a new report has revealed.

The National Council for the Training of Journalists has published its annual report, which has revealed 65 of the 99 trainee journalists to sit the National Qualification in Journalism during 2018-19 were successful.

The annual report also features a piece from Sky News special correspondent Alex Crawford, the NCTJ’s patron, in which she described 2019 as “the year of the lie”.

Alex, pictured, said: “This has been the year of the lie – and it’s down to journalists the world over to put a stop to this. Because no-one else can. It doesn’t matter how senior or junior you are; how skilled or inexperienced you are.

“Whether you’re just entering the profession after receiving an NCTJ certification or you’re 30 years into the news business. It’s a duty that never ends. So please help stop this.

“When you’re setting your goals for the next year, maybe make this one of your top priorities? This is where top quality training provided by the NCTJ comes into its own.

“The NCTJ mission is to provide the backbone; the muscle; the foundations for journalists from all cultures, social groups and genders to thrive and hold all, all to account.”

Full details of both the July and November sittings of the NQJ are due to be published next week – including pass rates, the names of those who passed in November, exam content and the end of year examiners’ report.

The full list of those who passed the NQJ in July is as follows: