A regional daily has been credited with keeping a rapist and murderer behind bars after a front page story revealing his victim’s family’s “terror” over his release was seen by government chiefs.

Michael Wade has had his parole hearing called off after Newcastle daily The Chronicle ran an interview with Joan Robinson, sister of his victim Jean Whitfield, in which she revealed her fears at the prospect of him being set free amid fears he could strike again.

Ms Robinson was subsequently told the Home Office was sent a copy of The Chronicle’s splash – and now has also had it confirmed Wade will spend a further two years in a closed prison before being considered for release or a move to an open jail.

Ms Whitfield was raped and later drowned in the bath by Wade, who had prior convictions for rape and violence, after he forced his way into her home in Gateshead in August 1999. 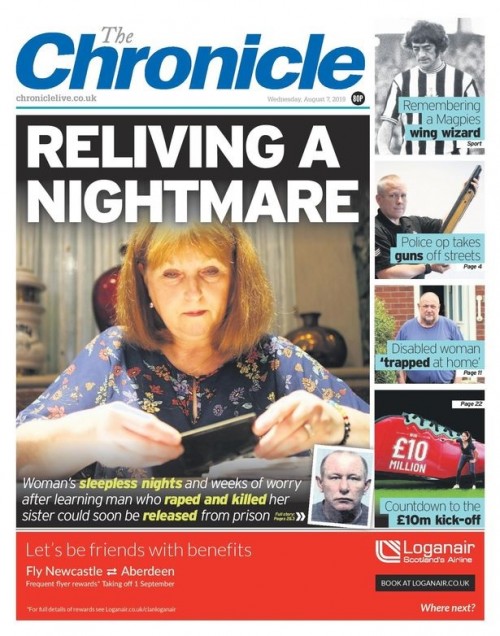 Ms Robinson, 57, told the Chronicle: “I got a call to say someone had looked at his case and he’s not getting out. I was told by Victim Support that the article in the Chronicle was sent to them.

“I think the story has prompted them to have a look at it more closely. I just sat and cried when they rang us. I’m so relieved.”

Ms Robinson’s Victim Liaison Officer has apologised for the distress the prospect of Wade’s release had caused her.

Of The Chronicle’s coverage, she added: “When I saw it on the front page I was over the moon. I just wanted to let people know what he’s capable of.

“He could just go on and do this again. It does make me wonder how many other people like this slip through the net as well.”

Helen Dalby, senior editor and head of digital for Reach plc’s North-East titles, told HTFP: “We are proud to have been able to support Joan’s case, and give her a voice she would perhaps not otherwise have had.

“We felt it was vitally important that we highlighted this case and brought it to the attention of the Parole Board.

“As a trusted local news publisher, we are committed to supporting our community and making a difference for the people of the North East, and this demonstrates the positive impact that local journalism can have.”