The amazing life of Charles Curry MBE: A son’s tribute

Charles Curry, long-time proprietor of the New Milton Advertiser and Lymington Times, has died aged 98 after a career in local newspapers lasting more than three quarters of a century.

Taking over the family-owned weekly from his father in 1966, he ran it until he finally stepped down aged 91 in 2o12, although he continued to write a column for a further two years.

Such was his love of print that he famously reassembled a printing press in his mum’s back garden and powered it with a John Deere tractor engine. The contraption continued to print the paper until last year.

His son, Eddie Curry, has penned a moving tribute to his father which tells not only his life story but much of the history of the paper.  Here we publish it in full.

In 1893 Frank became one of the founding members of the Chartered Institute of Journalists – now one of the oldest professional bodies for journalists in the world.

The CIOJ was born out of a meeting held in the July of that year with other journalists to discuss access to information, access to court proceedings, allegations of fake news, court proceed-ings and a lack of a safety net for colleagues and dependents.

The result was the formation of the Association of Journalists which went onto become the CIOJ.

Frank died at just 39 in 1894 leaving a widow and three children. One of them, Frederick Charles Townley Curry, was educated at Spurgeon’s Orphanage in London as a ward of the CIOJ.

He went to work on ‘The Cornishman’ as a junior reporter before emigrating to Canada where he became a reporter on the Toronto Telegram.

Frederick joined the Canadian Expedition Force in 1914 during the First World War but became ill during preliminary training in Salisbury, England, and was invalided out of the army.

He went onto become the editor of the ‘Canadian Daily Record’ in Fleet Street during the first World War working for Lord Beaverbrook producing a newspaper for Canadian troops serving abroad.

He was awarded an MBE for his help in getting injured Canadian troops a period of con-valescence before they were sent back to the front line. In 1919 he went to work on the Daily Express in Fleet Street London before deciding to go back to Canada.

He re-joined The Toronto Telegram for two years before returning to England where in 1925 he relaunched the Christchurch Times which had shut down as a result of a libel action against it.

In 1930 he sold his shares in that newspaper to buy the New Milton Advertiser. He had been buying the paper with a business friend who had neglected to tell him that his half was still in a trust and the trustees would not let him have access to it.

So Charles’ in-laws mortgaged their home and lent him the money to buy the Advertiser which he published very successfully. In 1932 he started the Lymington Times, living in a three storey house opposite what is now M&S. 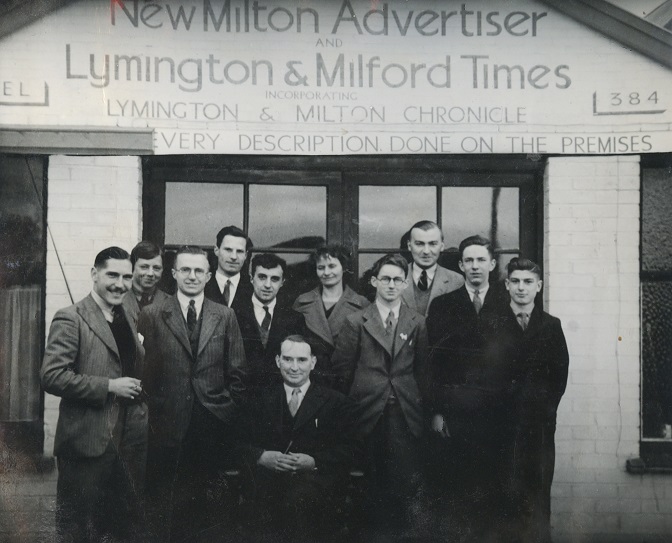 Frederick had two sons Charles and Teddy who both followed him into the business. Charles who was born in 1920 started at the A&T when he was just 16.  In 1966 Frederick died leaving the A&T in the hands of his sons – Charles in charge of editorial and Teddy running the accounts department.

In 1990 at the age of 65 Teddy decided he wanted to retire, but Charles (who was 70 at the time) did not want to give up working. In attempting to keep the newspaper going he had a meeting with Sir David English who he had worked with when they were both junior reporters.

Sir David was quite keen to buy into the business but the conditions he laid down for the purchase were not agreeable to Charles who instead managed to borrow the money from Barclays Bank by re-mortgaging his house.

Charles’ wife was disabled and it was a lot for her to agree to take on such a loan at their ages but she agreed.  Her faith in her husband’s business acumen was not displaced as within three years he had repaid the lot.

His belief in the power of the A&T was so strong that he told one estate agent who was about to open a branch at Lymington to wait because at the time there was not enough space for him to get an ad in the paper and so he was doomed to failure.

Charles served at the newspaper for over 76 years only being inter-rupted by World War II when he joined the RAF. His role was to mend the telephones. Always obsessed by tinkering with bits of machinery Charles managed to install a transformer in his Nissen hut – which made his much brighter than all the others much to the bemusement of the other servicemen.

Charles served mostly in the UK until he complained to his commanding officer that he believed there was a scam going on regarding the NAAFI and canteen, items being delivered did not match the order sheet. Instead of being congratulated he was sent off to Berlin in a three ton truck where he spent his time collecting bits of scrap planes.

Charles also created generators out of old Bournemouth trolleybuses to power his business and would forever be taking things apart to see how he could reuse them.

The A&T was running a 1903 hot metal press and was the last publisher in Europe using hot metal.  In the nineties it became increasingly difficult to obtain the necessary flongs for casting plates.   When a scrap Hoe and Crabtree converted letterpress printer became available, Charles paid a scrap metal merchant money to knock a hole in the press hall where is was standing  and take it out in complete units, then brick the wall up again.

He reassembled the 120-ton press in the back garden of his mother’s bungalow in Compton road.   This was powered by a John Deere tractor engine, coupled to a marine alternator. This produced the A&T from 1995 until last year.

The paper finally went to computerised production in 2009. Despite using the hot metal press for so long Charles was not adverse to new technology. In 1978 he acquired a second hand PDP8 Computer and had a software engineer wrote a typesetting programme for it.

Charles, who was awarded an MBE for services to journalism in 1997, ran the A&T as editor until 2012 and continued to write for it until 2014 by which time he was 94. He was still driving at the age of 91 until an optician at Specsavers gently suggested he should give up.

Charles still kept a keen interest in the paper which now reaches 40,000 readers as far away as Fareham and Poole. Until his death Charles still owned the business with his son Eddie, daughter Caroline and granddaughter Marianne Gregory as directors.

The paper is facing a tough time in the industry with many local news-papers being brought up or closed down.

The A&T is evolving in this era of a worldwide move from print to online. Last year the newspaper went colour and is now printed on high-speed presses in Portsmouth, Hampshire, owned by JPI Media.

The newspaper editorial and advertising staff moved to new premises at the same time which incorporates meeting and board rooms for hire.

Where the old offices were is now the IncuHive an exciting new business venture which provides office work spaces for rent,  a microbrewery for hire and even a 3-D printer.

Compared to other local newspapers the A&T is continuing to hold its own in a difficult market.