A High Court judge has backed a ban on the press naming two teenage murderers even though both have now reached adulthood.

HTFP reported last month that lawyers representing the killers of Angela Wrighton had obtained an interim injunction extending their anonymity, even though one of them had reached the age of 18.

The killers were both 15 at the time of their conviction, and had been aged 13 and 14 when they carried out the attack on their 39-year-old victim. 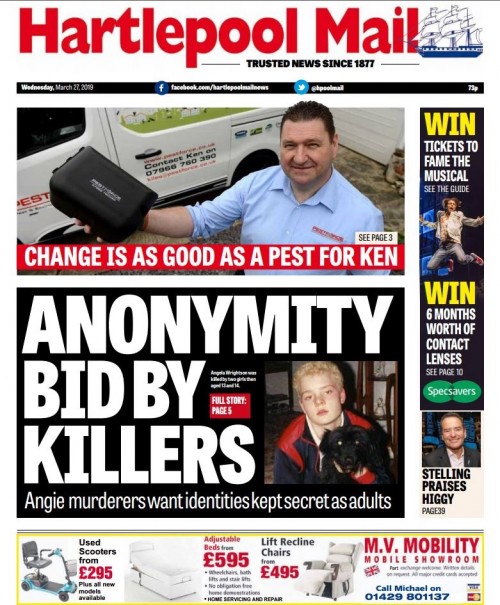 How the Hartlepool Mail covered the anonymity bid last month

In April 2016, a Hartlepool Mail survey found 89pc of readers wanted restrictions barring the newspaper from naming them lifted after they received life sentences.

The pair had used a television set, a shovel and other items as weapons in the attack on Ms Wrightson.

According to ITV News, the High Court heard one of the murderers had tried to kill herself on a number of occasions.

Mr Justice Davis agreed to extend the interim injunction, while psychiatric reports are completed and full legal arguments are drawn up.

The Press Association is arguing the girls’ identities should be revealed, and a full hearing and final decision is expected towards the end of 2019.