A Sunday newspaper launched a year ago in the wake of a predecessor title’s closure has marked its first year of publication.

The Glasgow-based Herald on Sunday hit the streets on 9 September 2018 as a replacement for the Sunday Herald.

Since then it has been named Daily/Sunday Newspaper of the Year for titles with a circulation below 15,000 at the Regional Press Awards and published a series of hard-hitting investigations.

These have included revealing that Glasgow City Council would have to sell off many of its prized properties to cover its equal pay bill and exposed politicians using controversial gagging clauses to silence staff. 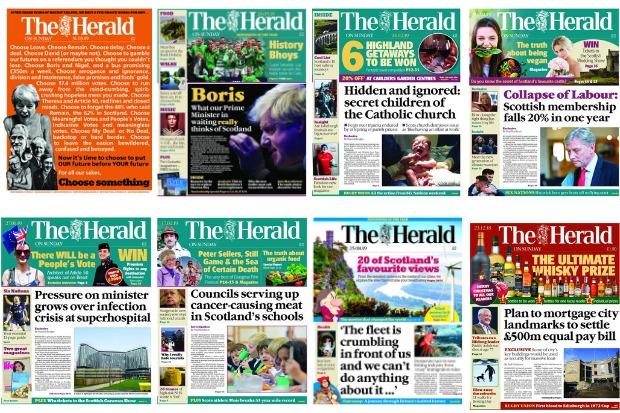 In an editorial to mark the anniversary, the paper said the past year had been “quite a ride.”

“From the moment Scotland’s newest quality Sunday publication burst on to the media scene on September 9, 2018, we’ve been making a big noise,” it said.

“In that time, The Herald on Sunday has been at the forefront of some of the country’s most important stories. Our reporters have set the national news agenda week after week on topics including health, politics, environment, land use and justice.

“Along with ground-breaking exclusives on the scandals affecting both Glasgow’s flagship super hospital and Edinburgh’s new Sick Kids’, we have successfully campaigned for nitrite-containing meats to be banned from schools and hospitals, revealed that Glasgow would have to sell off many of its prized properties to cover its staggering equal pay bill and exposed the politicians using controversial gagging clauses to silence staff.”

Editor-in-chief Donald Martin said: “For a paper so young, it has been wonderful to watch The Herald on Sunday achieve such great things.

“The publication has become a worthy addition to the Herald brand, and has allowed us to achieve our goal of giving our readers the best insight, analysis and opinion, without agenda or bias, seven days a week.

“I would like to thank the team who produce such great work every week, but I would also like to thank our loyal readers for helping us to create such a strong seven-day brand, both in print and online.”