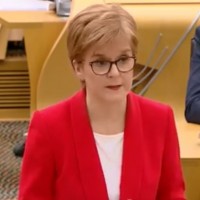 Nicola Sturgeon has described planned cuts at a series of newspaper titles as “deeply concerning” after journalists at the group voted for strike action.

HTFP reported on Tuesday how journalists at Glasgow-based daily The Herald and its Newsquest sister titles in the city had voted to go on strike after nine members of staff volunteered for redundancy to help stave-off compulsory job cuts.

Andy Wightman, MSP for Lothian, quizzed her during First Minister’s Questions yesterday on whether more should be done at a political level to “restore and sustain a healthy, vibrant print media” in the wake of the cuts.

Ms Sturgeon, pictured, replied it was a “matter of concern and regret” when journalists lost their jobs or were made redundant.

She added: “All of us feel the discomfort of media scrutiny from time to time, but it is absolutely essential that we have journalists there to do that, to hold us to account and to make sure that scrutiny on behalf of the public happens.

“I do think, looking at Newsquest in particular, some of the cuts that are happening there are deeply concerning.

“I won’t comment too much on the vote for strike action. That’s for the workers there to decide, but I fully understand the sentiment.

“Obviously politicians have to always be careful about how we look to intervene or anything that could be construed as interfering in the media.

“But I think all of us want to make sure we’re doing what we can to support not just a free and fair media, but a vibrant and successful media in Scotland as well and indeed in countries across the world.”

In a memo seen by HTFP, Newsquest Scotland editor-in-chief Donald Martin wrote: “Although I will be very sad to lose such a wealth of talent and experience, I much appreciate the gesture they have made as it means we are making significant progress towards achieving the savings required.”

The company declined to comment on Ms Sturgeon’s remarks.