An award-winning sports journalist has thanked readers after publishing an emotional tribute to his father – who first introduced him to the football club he now covers.

Jon Colman, of the Carlisle News & Star, penned a piece reflecting on his first season reporting on Carlisle United without his dad Jeff, who died in May at the age of 79.

Jon had been taken to his first United match by his dad at the age of eight in 1989, and has gone on to cover the club for the News & Star since 2005 – winning multiple industry awards in the process.

In his piece, Jon said his father had taught him that football was “above all a matter of loyalty and locality, best experienced not on a screen but by what was affordable and accessible.” 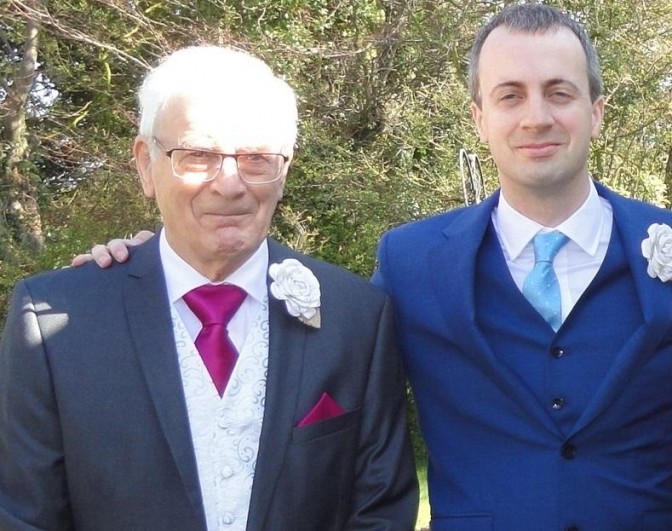 He wrote: “Typing these words is torture. But it’s also easy, because the memories rush back so vividly.”

Jon added: “As a father to my brother and me, and in the wider world, he was the kindest, most selfless soul and, in retirement from his careers as an engineering draftsman and in horticulture, he helped people with learning difficulties.

“A couple of times a season he would bring a young client to Brunton Park [United’s home ground]. From the press box in the Main Stand I’d look down to the Paddock. There they’d be, sending thumbs-up greetings from our old spot.

“That told me traces of our tradition were still in him and, although the strongest passion had waned, he’d still observe, argue and appraise, and would read my reports more than I realised.

“They would, I recognise now, form a basis for debates we can no longer have: the witterings of managers, the toils of players, the signings that worked and failed.”

Jon told HTFP he had been “extremely touched” by readers’ reactions to his piece, which was published ahead of United’s first game of the season on Saturday.

He said: “Going to watch Carlisle United with my dad was such a central part of my life from eight years old that I’d had a few thoughts in my head about an article like this for some time. He would have been 80 later this year, and that seemed like an appropriate milestone to write about how much it had all meant. Sadly, he died before I got the chance to do that, and in those first, emotional days after his passing I wondered how I’d ever be able to bring myself to write again with a clear head about the club and the team we had shared for so many years.

“I was, though, very lucky to have a fantastic editor in Chris Story, who was extremely supportive at such a difficult time – and was also happy for me to have the space to write about my dad in Saturday’s paper. It certainly wasn’t easy – I was tearful the first time I tried to put the words down – and it took me a few attempts to finish it, but I found it quite a cathartic experience in the end.

“I was extremely touched by, and grateful for, the response it received from readers, particularly after I posted the article on Twitter. Many people said it struck a chord with them and that was partly my reason for writing it – we all have our rituals when going to the football and in a great many cases it starts with our dads, other family members or close friends.

“We can, as journalists and supporters, get easily caught up in the daily detail and madness of following our teams, and rightly so. But remembering my days with dad on the Paddock at Brunton Park reminded me why so many of us do it in the first place, what is truly important, and what connects us. He would, I’m sure, have been amused by all the attention, and would certainly have approved of Carlisle getting three points the day the article appeared.”