A sports reporter has bowed out from a regional daily after more than half a century of service to the newspaper.

Andy Bradshaw has retired from the Jersey Evening Post, on whose payroll he had been since 1967.

Andy joined the JEP as an apprentice compositor at the age of 15 in December 1971, the week after leaving school, but had worked for the paper as a van boy on deliveries from the age of 11.

During his career he has interviewed sports stars such as footballers Ian Rush and Peter Osgood, cricketer Angus Fraser and snooker world champion Dennis Taylor, and has also reported for the JEP from Island Games in the Isle of Wight, Isle of Man, Guernsey and Rhodes. 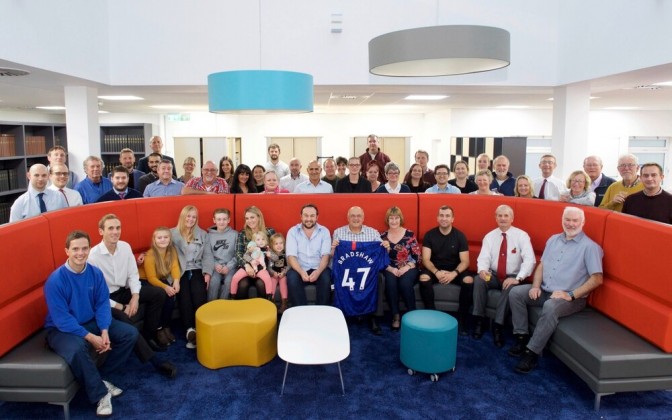 Andy told the paper: “It’s been a most enjoyable nearly 48 years inside the building and four years delivering papers.

“I’ve always tried to do my best and hopefully that’s come out in the articles I’ve written.

“I’m going to miss the camaraderie round the office and have worked with a lot of great people and have had a lot of support. I would like to thank everyone I’ve worked with.”

After working as a compositor Andy became deputy manager of the keyboard department, before the move into sports reporting in 1990.

Andy was based at the paper’s old Charles Street office during his six-year apprenticeship prior to the JEP’s move to a new site at Five Oaks in 1977.

The paper’s 42-year spell at Five Oaks ended last month, and Andy made the move back to new offices in St Helier, just a few yards from the old Charles Street premises, for his final few weeks with the title.

Current and former colleagues, as well as several members of Mr Bradshaw’s family, joined a farewell presentation on 30 October.

Leaving gifts including a garden shed in which he will spend some of his retirement, and a Chelsea football shirt bearing the number 47 to denote his number of completed years as a full-time employee.

Andy and his wife Jenny have two sons, Darren – a fellow employee at the JEP – and Lee, as well as five grandchildren.