Tributes have been paid to Peter Byram, who held the post at the Shropshire Star during the course of a 42-year career in journalism.

Peter was known for his love of cricket, and Yorkshire County Cricket Club in particular.

After hearing of his recent illness, former Yorkshire and England cricketer Sir Geoffrey Boycott, who Peter had met several times, sent him a personal message. 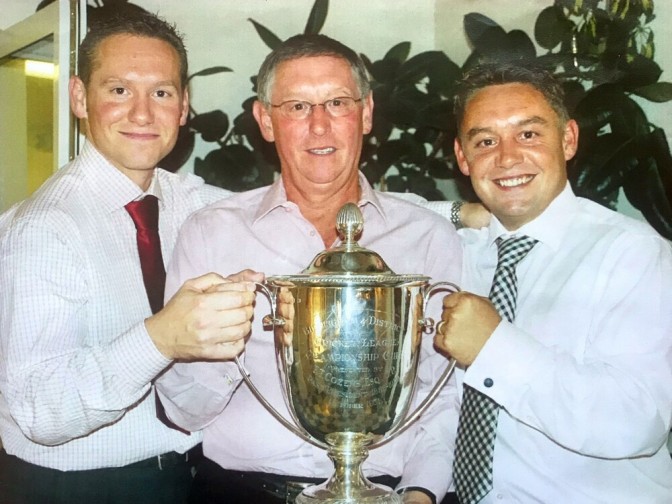 Peter Byram, flanked by sons Gavin, on the left, and Adam

Current international Jonny Bairstow, another Yorkshireman, also took time during the England tour of New Zealand to send him a video message of support.

Peter’s son Gavin told the Star: “Dad loved it. Dad had cricketing friends all over the world, and we have had messages from all over the world. Cricket was his life. He said what cricket had given him was irreplaceable.”

Peter was born in Wellington, Shropshire, and was talented at football, cricket, and badminton as a youth, playing in the All England championships.

He joined the old Wellington Journal & Shrewsbury News on 28 May 1962, and soon after the Shropshire Star was launched joined that paper on the sports desk, rising to become sports editor in July 1987. At the time of his retirement in June 2004 he was sports editor of Shropshire Weekly Newspapers.

Peter was a life member of Wellington Cricket Club and captained the second team for many years. He also served as its general secretary between 1973 and 2018.

In a statement, the club said: “He was a pivotal figure in the day-to-day running of the club and a key architect behind its development.

“Younger members may know Pete best for his tireless work behind the mower – he became ground chairman in the early 2000s – but in truth this represented only a fraction of his vast contribution over six decades.

“Pete’s passing will leave a massive hole in the fabric of Wellington Cricket Club.”

Peter only moved about 200 yards during his lifetime, living first with his parents in Haygate Road, Wellington, and then, on his marriage to wife Margaret, buying the house next door.

The couple celebrated their golden wedding anniversary on 18 April.

Peter is also survived by four grandchildren, two of whom, Elliot and Freya, play cricket for Wellington teams.

Funeral details are yet to be announced.