Marvel Studios has rejected a bereaved family’s bid to put an image of Spider-Man on their child’s grave despite a weekly’s appeal to Hollywood stars urging them to support the idea.

The Kent Messenger had reached out to actors who star in Marvel films including Robert Downey Jr, Chris Hemsworth, Karen Gillan and Brie Larson in a bid to help the family of four-year-old Ollie Jones, who lost a two-year battle with leukodstrophy, a rare genetic disease, in December.

The Jones family had want to use a copyrighted image of Spider-Man on Ollie’s grave, but were told by Maidstone Council they would need Marvel’s permission to do so.

Despite the Messenger’s appeal, Marvel owner the Walt Disney Company has refused permission on the grounds that they didn’t want their characters to be associated with death, although Ollie’s father Lloyd told the paper the reasoning “made no sense” because characters die in the films produced by the studio. 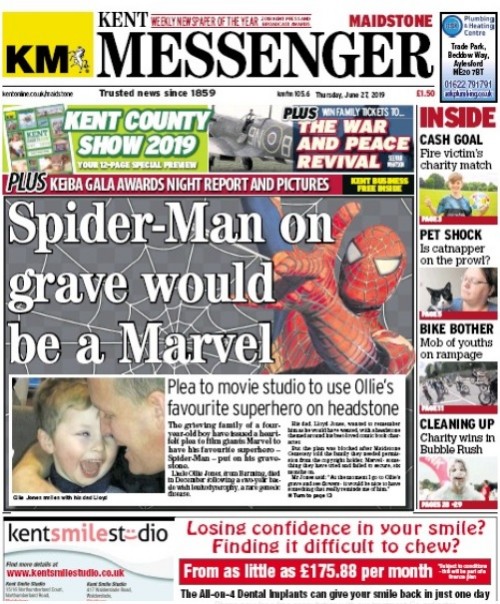 The Messenger splashed on the appeal last week

Walt Disney’s response to the family read: “We extend our sincere condolences. If we played a small part in Ollie’s happiness we are honoured.

“Generations of fans have responded to our characters with the same wonder and delight that Ollie did. In fact, many believe the characters to be real.

“We have striven to preserve the same innocence and magic around our characters that brought Ollie such joy.

“For that reason, we follow a policy that began with Walt Disney himself that does not permit the use of characters on headstones, cemetery or other memorial markers or funeral urns.”

Messenger editor Denise Eaton told HTFP: “I’m at a loss to understand how a global brand such as Marvel could deny the family this request.

“Marvel’s excuse seems pretty lame, especially given the content of many of its films, and I hope there’s a surge of public support to see it reversed.

“Hopefully there’s someone with a bit more common sense and compassion at the studio and the self-centered decision is overturned. Shame on them.”