A local journalist who was sent a photograph of himself taking a nap on a train has laughed off claims he was “sleeping on the job.”

Darren Burke, of the Doncaster Free Press, received an email from a reader headed “lazy journalist” with a picture attached of him snoozing.

The reader, who called himself ‘Donny Spy’ cited the picture as ‘proof’ that Darren and his colleagues are “lazy cut and paste journalists.”

But Darren made light of the jibes in a piece about the incident in his regular Don Your Way column. 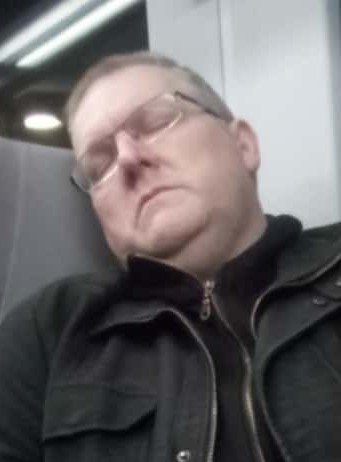 Wrote Darren: “The other day, I had a rather rude awakening (quite literally) when an email dropped into my inbox.

“Its heading was ‘lazy journalist’ and here, dear reader, I present to you its contents, as written exactly from its sender, who goes under the name ‘Donny Spy.’

“I always knew you lot were lazy cut and paste jounalists (sic) who just go round stealing news off facebook and stealing a living with the LIES you put out there,” my fan wrote.

“Well how does it feel that you have been caught and i have PROOF of how lazy you lot are.  Donny Spy is watching you and I saw you sleeping on the job today. Ha ha ha ha.”

“I scrolled down and realised there was an attachment on the email. It was a photo of my good self taking a brief nap on a train.

“Quite where, when and how it was taken and who by, I have no idea. All I can say with any certainty is that it was taken at the end of a tiring and busy working day.”

The picture was also copied to Darren’s editor and all his colleagues at South Yorkshire Newspapers.

Darren told HTFP: “You do expect some stick but social media has taken things to a new level. I might have to start sleeping with one eye open though!”