A paywall trial has been launched at two sister dailies in what its owner hopes will “reduce our exposure to falling advertising revenues”.

JPIMedia has set up paywalls on the websites of both Blackpool daily The Gazette and Portsmouth daily The News.

The subscription scheme has launched with an introductory offer of a £1 per month for three months on the sites, with other titles set to follow in due course.

Readers will be able to access five free articles per week before being asked to pay, with individual subscriptions being required for each title they wish to access.

The new scheme was revealed to staff in an announcement by JPIMedia chief executive David King yesterday afternoon. 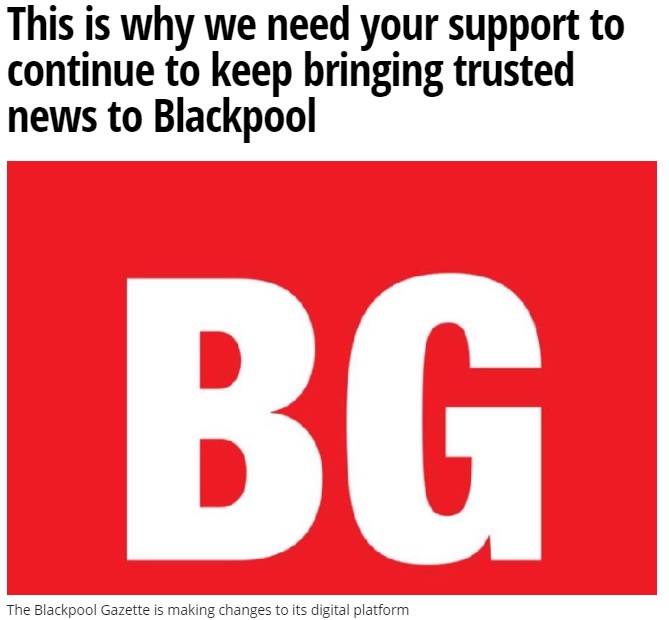 Said David: “As you know, we have been exploring a number of digital initiatives to help us build a sustainable business, including the launch of the digital acceleration programme, replatforming our websites, launching new apps and improving content tagging.

“Today we are launching a subscription model that will help us develop a new income stream and reduce our exposure to falling advertising revenues. Digital subscriptions will initially run across two JPIMedia titles, the Blackpool Gazette and Portsmouth News with others to follow.

“We are launching with an introductory offer of a £1 per month for three months on Blackpool Gazette and Portsmouth News websites. We will place a metering limit of five free articles per week, before the user is asked to pay for access.

“The subscription offer focuses on helping the reader stay in the know, and have an enhanced online experience. This means fewer ads, access to our newsletters and free access to the app version of our publications.”

The scheme’s launch comes two weeks after JPIMedia began introducing a series of new “mobile first” websites, which will be brought in across all of its titles during 2019.

Last month the company also announced it was set to trial a newsroom restructure which will see journalists move away from the print production process and concentrate on digital work.

David added: “Impartial, high-quality journalism costs money to produce and cannot be sustained through traditional advertising alone. We will ask our readers to pay for our regulated and trusted news service.

“There is growing evidence the public is willing to pay for digital content and we will focus on learning which content our loyal audiences want.

“We will be keeping you up to date on how these launches evolve and share with you what we learn about our most loyal readers. This is the start of a long journey as we start to shape our new strategy.”

Some of the newspapers involved began uploading short ‘teaser’ stories to their sites, with a £5 subscription for anyone wanting to read them in full. The experiment was later quietly dropped by the company.

In May last year the Yorkshire Post, then owned by JP, introduced online registration for readers in a move designed to prevent the use of ad-blocking software.