A journalist who was sexually assaulted while working has highlighted the safety fears of women on her patch after an investigation into the issue.

Susie Beever, who works for JPIMedia sister dailies the Yorkshire Evening Post and Yorkshire Post, has produced a series of features focusing on concerns felt by women in Leeds after launching an appeal via social media for people to talk to her about issues they have faced.

The appeal prompted rape and other sexual assault victims to come forward, along with women who had been physically attacked and faced other forms of harassment.

HTFP reported in 2017 how Susie herself had been left “disheartened” after being accused of fabricating a sexual assault she was the victim of while conducting a vox pop for her old newspaper the Huddersfield Daily Examiner. 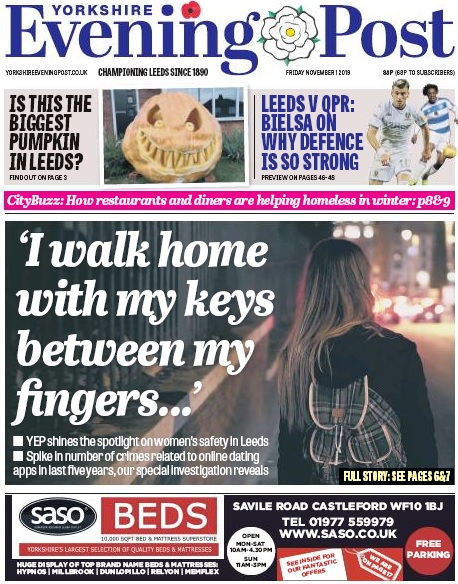 The YEP splashed on Susie’s investigation on Friday

Earlier this year, she also received a threat telling her she would pay “the ultimate price” after covering a far-right protest in Leeds for the Examiner.

Susie’s investigation – which featured on the front page of Friday’s YEP – has prompted the paper to run a series of stories highlighting the concerns of those she spoke to – including a woman who was raped by a man she met on a dating app, one who was sexually assaulted by a taxi driver and another who was harassed while out exercising.

Susie told HTFP: “I was initially surprised at the scale of responses I was getting from women when I put a request out on social media to say I was writing a piece on how safe women felt walking around Leeds at night.

“However, nothing prepared me for the moment I discovered a load of unseen messages in my spam folder. Literally dozens of messages I had somehow missed two weeks ago; messages from women who had been raped, women who had been physically attacked, groped, catcalled, chased.

“This is a small sample of women in my patch who have felt victimised, but it’s not specific to Leeds, or even the UK.

“The common denominator in all these attacks was that victims were made to feel somehow responsible. One rape victim who was attacked by a man she met on an online dating app told me how her own father claimed it was her fault as she ‘put herself in a vulnerable position’.

“It’s not illegal for women to go on dates, or to go out for a run alone at night, or to wear a short dress on a night out. It is illegal to sexually assault women. I hope more people wake up to this from hearing these victim’s experiences.”