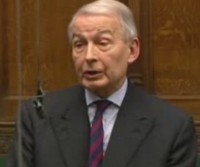 A senior MP has hit out at the pensions watchdog’s decision to drop its investigation into Johnston Press – describing the move as “beyond baffling”.

Veteran MP Frank Field, chairman of the backbench Work and Pensions Select Committee, has criticised the Pensions Regulator after it announced earlier this week that it had found “no evidence to suggest that insolvency was avoidable” in the case of the former regional publisher.

Mr Field, pictured, previously raised concerns about the so-called “pre-pack” deal which saw JP sold in November to JPIMedia, a new company made up of its previous debtors, after a brief period in administration.

The new owners agreed to wipe out £135m of JP’s £220m debt and inject £35m of fresh capital into the business, but the company’s defined benefit pension scheme, which has estimated liabilities of £109m, did not transfer over.

Instead, the Pension Protection Fund, a ‘lifeboat’ scheme set up by the government to provide pension benefits to members of schemes whose sponsoring employers have become insolvent, will now assess whether it needs to take responsibility for the scheme.

According to a report in specialist magazine Pensions Age, Mr Field said: “This nasty little trick of ‘pre-packs’ being used to bundle up a company bankruptcy and quietly jettison the pension scheme into the PPF has long been on TPR’s radar.

“The PPF raised the alarm straight off about the Johnston Press pre-pack, not least because its finances were in decent enough shape: they had some cash to put into the pension.”

“How TPR has decided there’s no avoidance case to answer is beyond baffling – and there’s no real indication in their report, nothing to explain away our and PPF’s deep concerns.”

The Regulator launched enquiries into whether there was any viable alternative to JP entering administration and whether there were any acts before that point which required further scrutiny.

It also looked into whether the timing of the administration had been artificially engineered to avoid a scheduled contribution of around £885,000 that had been due to be paid into the scheme on 19 November 2018.

However, in a regulatory intervention report published this month, the Regulator said: “We found no evidence to suggest that insolvency was avoidable nor that the administration was planned to circumvent payment of the [scheduled contribution], nor that there were any acts pre-dating the administration worthy of further investigation.

“The administrators have also confirmed to us that their enquiries have not established any previous transactions which might require further investigation by them.

“We have liaised with the administrator and the Pension Protection Fund to ensure that should any new and relevant evidence be uncovered by them this will be provided to [the Regulator], and this may lead to us considering opening an investigation.”

HTFP has approached both the Regulator and Johnston Press for a comment on Mr Field’s remarks.