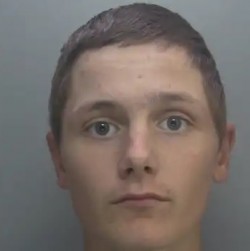 A senior detective has criticised “ongoing press coverage” of trials which “subject” victims’ families to details surrounding their loved ones’ deaths.

DCI Hurd said in a statement after Pearce, pictured, was sentenced at Winchester Crown Court to 17 years in prison that his admission of guilt had spared Mr Deary’s relatives from “ongoing press coverage” of a trial.

Seventeen-year-old Pearce’s identity was only made public at the sentencing after the judge accepted a letter from Ben Fishwick, chief reporter at Portsmouth daily The News, asking for reporting restrictions to be lifted.

Ben’s colleague Steve Deeks was in court to hand over the letter.

But, after the sentencing last week, DCI Hurd said: “I hope today’s sentencing provides some closure for Michael’s family at the end of this thorough investigation.

“The defendant’s admission removed the need for a trial, which would have subjected Michael’s relatives to ongoing press coverage of all of the details surrounding his death.

“However this is still a difficult time for his family and friends who would like their privacy to be observed.”

The court was told Pearce stabbed Mr Deary several times and that the body was not discovered for several days.

Reacting to DCI Hurd’s comments, Ben posted on Twitter: “Wasn’t in court for this today but glad a letter I wrote to the judge from [The News] asking for the reporting restrictions on naming the 17-year-old defendant to be lifted was successful.

“Clearly good that police got evidence so killer was successfully prosecuted.

“But disappointing Hampshire police used a statement after sentencing to seemingly criticise the press – especially when killer only named after press application and initial witness appeal carried by us.”