A Scottish daily newspaper is set to produce a special Welsh edition this weekend – featuring articles written in two languages.

Newsquest’s pro-Scottish independence daily The National has announced the one-off edition, which will be given out for free to marchers at a Welsh independence rally in Merthyr Tydfil tomorrow.

Up to 2,000 copies of the bilingual English and Welsh edition, which will feature eight pages of news plus sport, will be distributed to demonstrators at the All Under One Banner Cymru march.

It will also include an exclusive article by Adam Price, leader of Welsh independence party Plaid Cymru. 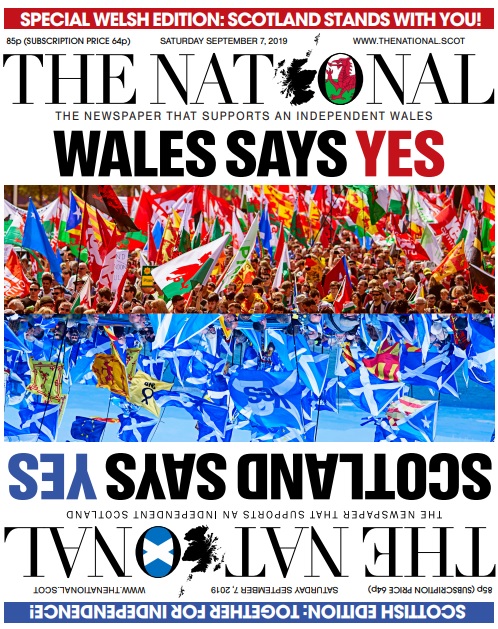 How the front page of tomorrow’s Welsh edition will look

He told The National: “Something’s happening in Wales. There’s a surge of interest in Welsh independence and it’s good to see that The National is taking notice.

“Saturday’s march in Merthyr is one more sign that we in Wales will not be far behind our friends in Scotland in campaigning for independence to safeguard our future in Europe.

“We wish we had a newspaper like The National publishing in Wales. Why don’t you come and join us? The water is warm.”

“On a day in which thousands of people in both countries march for self-determination, we wanted to show solidarity with our friends in Wales with this special one-off (probably) edition.

“Our circulation is currently 10pc up on this time last year, and with thousands of new digital subscribers as well we’re in a strong position to have a massive influence in the next referendum campaign.

“The success of The National proves there is still life in print – as long you put innovation at the heart of your newsroom.”