Journalists from rival newspapers successfully fought to lift a ban on naming a teenage murderer who stabbed a man to death.

Gasson, pictured below on the front page of The Argus, had been found guilty by a jury at Hove Crown Court of the murder of Arnold Potter, 24, who he stabbed in the chest following a row over drugs in Crawley.

After the verdict was delivered, Michael and Aidan both made applications to Judge Jeremy Gold QC to overturn the order under Section 45 of the Youth Justice and Criminal Evidence Act 1999. 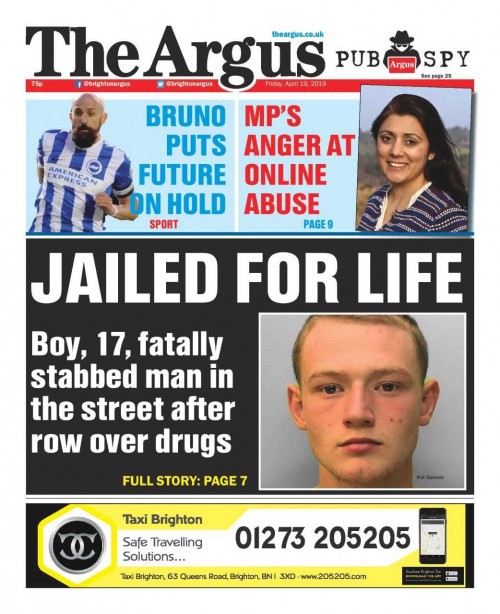 The defence team, led by barrister Michael Ivers QC, had argued against the routine naming of young people in courts, and the wider impact that could have Gasson’s family.

But Michael and Aidan cited the strong public interest in identifying Gasson after the stabbing caused shock in the community.

Judge Gold told the court: “There is a public interest in matters of this kind being properly and fully reported so that the public who may be concerned about what is happening in the country generally, or in the particular area of where they live may have a legitimate interest in naming of the defendant who has been convicted of a crime such as this.

“Of course there is significant public concern about knife crime and about knives being routinely carried by youngsters in the street and being used in the context of drug use and drugs transactions. It seems to me this is an appropriate case for the lifting of the section 45 order in relation to Kai Gasson. I therefore make an exception order accordingly.”

Gasson had claimed he was acting in self-defence as he believed Mr Potter held a knife to his throat while trying to steal his drugs, but  witnesses had told the trial they did not see a knife being used by Mr Potter.

Judge Gold jailed Gasson for life, with a minimum term of 15 years.

Aidan told HTFP: “This was a serious case which shocked the community over knife crime. Kai Gasson had initially gone on the run and tried to hide the knife, before handing himself in.

“Judge Jeremy Gold QC was clearly very aware of the public concern over knife crime, he warned the jury about not bringing in any preconceived ideas before the trial started, and acknowledge it again in his sentencing remarks.

“So from our perspective as the media, both Michael and I felt it was clearly important that the public should know what had taken place in their community.

“Our challenge to the S45 order shows that the media still has a vital role to make sure that justice is seen and the public can understand what really happened.”