In the first of a series of pieces reviewing the past 12 months in the regional press, we look back at the takeover that didn’t happen, the launch of a new subscription-based sports website, and the regional publishers’ ambitious digital plans for 2020.

Consolidation has been the watchword in the regional press over recent years, with newspaper publishers coming together in ever-larger groups to take advantage of cost synergies and maximise digital reach.

But the much-anticipated move from a ‘big three’ to a ‘big two’ in regional media has yet to materialise with the long-running JPIMedia takeover saga set to stretch out into 2020.

The hedge funds who had taken control of JPI at the end of 2018 put it up for sale in the summer, but failed to tempt either of its fellow publishing giants Reach and Newsquest into concluding a deal for the business.

The impasse left David Montgomery – the man who created Local World from the old Northcliffe empire before selling it on to what it is now Reach – as the front-runner to pull off the sale, if only because he appears to be the last man standing.

Among the smaller local press groups, Iliffe Media continued its steady expansion by taking a stake in both Scottish Provincial Press and the Newbury Weekly News to add to its 2017 purchases of the KM Group and the old East of England division of Johnston Press.

And there was a change of leadership at Archant, with Jeff Henry stepping aside to allow Simon Bax to take on the role of executive chairman.

The spate of newspaper closures that has characterised the past few years slowed somewhat in 2019, but the year still saw a number of print titles hitting the newsstands for the last time, among them The Buteman, the Harlow Star, the Herts and Essex Observer and the Bucks Advertiser.

Other titles that passed into newspaper history included the Epworth Bells, one of ten JPIMedia titles axed at the end of June, and the Chorley Citizen, which closed as part of a round of pre-Christmas cutbacks at Newsquest.

Independent Scottish publisher Argyll Media swiftly launched the Isle of Bute News to replace The Buteman, but that aside, the focus of the year’s new launches was invariably in the digital arena.

In one of the year’s biggest and potentially most significant industry developments, US-owned subscription based sports website The Athletic launched a UK edition after poaching scores of top football writers – many of them from the regional press.

And towards the end of the year, both Reach and Newsquest unveiled plans for major digital expansions in 2020, with Reach set to launch seven new websites under its ‘Live’ brand in parts of the country traditionally served by other publishing groups.

But if the latter move opens up the prospect of a digital turf-war between the big groups, there was also a growing trend for publishers to co-operate on newspaper campaigns as they sought to maximise their influence with government.

The launch of the ‘Power up the North‘ campaign in June saw 33 JPIMedia, Newsquest and Reach titles across the North of England come together in a joint bid to tackle the North-South prosperity divide. 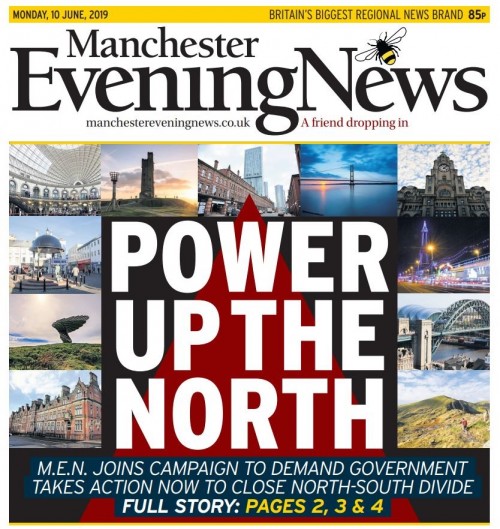 December’s General Election provided further scope for this united approach, with the three publishers launching a ‘manifesto for the North.’

It kicked off what was generally seen as a highly successful election campaign for local newspapers who led the way in exposing political propaganda dressed up as news and debunking social media claims of ‘fake news.’

One of the more unsavoury aspects of the year was the growing abuse of journalists on social media and, on occasions, in person, with the Examiner’s Susie Beever and Sussex Newspapers crime editor Michael Drummond among those in the firing line.

And as ever the year saw its share of departing editors, with the Nottingham Post’s Mike Sassi, Coventry Telegraph editor Keith Perry and the Yorkshire Evening Post’s Hannah Thaxter among the most high-profile.

The year ended with the industry garnering plaudits over its election coverage with the local press increasingly seen as the most trusted news source amid the blatant political partisanship of the national press and growing doubts over the impartiality of leading broadcasters.

The challenge, as ever, in 2020 will be turn the high level of trust that regional newsbrands undoubtedly continue to enjoy into the hard currency of increased digital revenues.