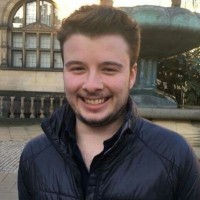 A journalist has successfully fought to name a teen knife attacker – despite court staff initially telling him he would not be able to report on the case at all.

Hampstead & Highgate Express reporter Sam Volpe, left, argued that a court order protecting the identity of Terail McDonald should be lifted after the 17-year-old was jailed after being convicted of causing grievous bodily harm with intent and carrying a blade.

McDonald stabbed Michael Onabanjo, who he had considered a friend prior to the attack, leaving the victim close to death in an alleyway in West Hampstead with his intestines exposed.

Judge Jane Sullivan sided with Sam after McDonald’s conviction, but attempts had been made to prevent him from reporting on the case at all before the trial started at Blackfriars Crown Court.

Sam told HTFP: “In short, it was a particularly shocking – thankfully non-fatal – stabbing. We follow it through the courts to the trial date at Blackfriars Crown Court, where when the trial begins, I’m bemused to be told there’s a court order and I can’t report on the case.

“Having corrected the clerk – there may have been an order, but I was obviously still entitled to be there – I ask the clerk for details of which order is in place.

“Between the court staff, the judge and the various defence and prosecution lawyers, they’re unable to find evidence of an order having previously been made, so the judge at this point makes a Section 45 order to protect the defendant’s identity. She invited representations – which I made – but decided to impose it anyway. But at this point she indicated she’d reassess if and when there was a conviction.

“This then happened, and I went down on Tuesday for sentencing with the intention of applying for it to be lifted. The same clerk manages to ignore me asking for a word before proceedings begin, so I just made a point of passing a note in sight of the judge.

“The judge suggested she was going to address the order anyway, though and again invited representations. Citing the defendant’s age, 17, along with the publicly notorious nature of the crime, the deterrent impact of naming him and the fact these things shouldn’t be automatic – thanks McNae’s – she took heed and decided to lift the S45.

“This didn’t stop the defence barrister later trying to get her to reconsider on spurious grounds – that siblings/cousins of the defendant would be adversely affected by naming him – but the judge wasn’t having any of it.”

The naming of McDonald marks the end of a long-running saga which began in November when police refused to reveal McDonald’s identity the Ham & High on a not-for-publication basis, prompting editor Ramzy Alwakeel to run an editorial criticising the decision for the difficulty it had caused in tracking the case.

Added Sam: “I’m pretty proud of striking a very small blow for the cause of open justice. And it’s worth saying that while court staff are in some cases still less than entirely helpful, it was heartening to be before a judge who was acutely aware of the importance of the press in this case.

“At the end of the day I was torn, and it’s not as if I can’t understand the ‘it’s harder to rehabilitate’ argument that was made, but I was glad to see the rights of the press upheld – and that’s not a particularly valid reason for a gag, either.

“All in all, I’m proud of being on a newsdesk where we were able to do piece of dogged reporting to get this told properly.”