A regional title has revived its historic tradition of producing illustrated covers to mark landmarks both for itself and its patch.

Dalesman has celebrated its 80th birthday and welcomed the UCI 2019 Cycling World Championships to Yorkshire with a revival of such a cover, which regularly graced its front page until the 1980s.

A recent reader survey revealed many favoured a return to illustrated covers.

Outgoing editor Adrian Braddy told HTFP Dalesman a number of “well-known artists” had featured on its front pages down the years. 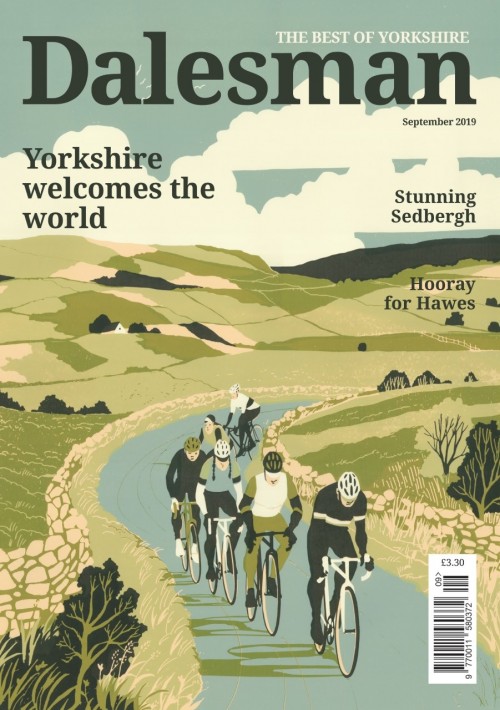 Adrian said: “The most famous of all was Ionicus, real name Joshua Charles Armitage. Best known as the illustrator of Penguin’s paperback editions of books by PG Wodehouse, Ionicus was also a regular contributor to Punch magazine. He illustrated many Dalesman covers, particularly in the 1950s and 1960s. These featured the fictional Ghylldale.

“From the 1980s onwards, Dalesman began using photography rather than drawings or paintings to illustrate its covers. However, many long-standing readers still fondly remember the covers as they used to be.

“When I meet readers one of the most common questions is ‘Why did you stop running those illustrated covers?’ and when, earlier this year, we carried out a reader survey, many of the 2,000 respondents requested their return.

“So, given that this is our 80th anniversary year, and because Yorkshire is to host the UCI 2019 World Championships in September, I decided to bring back an illustrated cover to mark both occasions.”

He added: “The illustration we have used is called Up Hill & Down Dale, a screen print by Eliza Soutwood. Its style is evocative of the early covers from the post-war years, which were printed with only two colours – black and green.

“Somewhat tentatively, I posted the cover on Twitter three days before it went on sale and was bowled away by the response. We have never received such a positive reaction to a cover and many people have said they will buy a copy simply because they love the design. Perhaps we will have to consider more illustrated covers in the future.”

Adrian will leave his role at the end of October after almost seven years to take up a new post as communications manager at Leeds-based charity SHINE.

Dalesman is seeking a replacement for Adrian, and the position is being advertised on HTFP.