An editor has hit out at reporting restrictions which had protected a teen killer, who raped and murdered a six-year-old, until his newspaper won the right to name him in court.

Aaron Campbell, 16, has been revealed as the murderer of Alesha MacPhail, who he abducted from the bed where she was sleeping before inflicting “catastrophic” injuries and dumping her naked body in woodland on the Isle of Bute.

Campbell was found guilty of the crimes yesterday, but remained anonymous ahead of a judge ruling today on an application by the Daily Record and Newsquest, among others, for reporting restrictions to be lifted.

The Record had splashed this morning on the bid, saying its readers deserved to know the name of the “despicable beast guilty of the most evil crimes imaginable”. 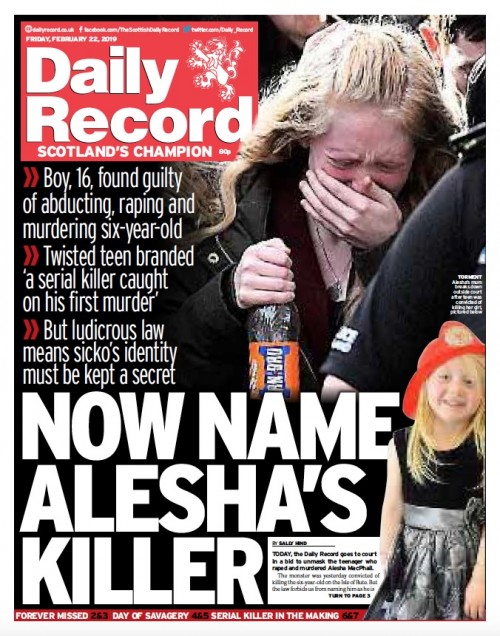 Campbell’s identity had been protected under Section 47 of the Criminal Procedure (Scotland) Act 1995, under which all media outlets are prohibited from publishing the name and address of anyone under 18 who is accused or convicted of a crime.

Speaking to HTFP after restrictions were lifted, Record editor in chief David Dick said: “We’re delighted with the judge’s decision. Let’s not kid ourselves that this is a wayward child who needs protecting.

“This is a cold, calculating killer, who raped and murdered a six-year-old and then dragged her family through even more torture when he blamed Toni McLachlan (Alesha’s dad’s girlfriend) for the murder.

“He knew exactly what he was doing, the misery it would cause and has shown no remorse for his horrendous crimes. What business does the law have protecting the identity of such an individual?”

During today’s hearing, presiding judge Lord Matthews heard that it was ‘”highly likely” that the teenager’s identity was known on the Isle of Bute, as well as by fellow inmates at Polmont Young Offenders Institute.

The High Court, in Glasgow, also heard Campbell “endorsed an adult lifestyle” and how an innocent person he tried to blame for the crime “had no protection against having her name and photograph published”.

The judge was also told the statutory protection only has 15 months left because on his 18th birthday he can be named, meaning the restriction was only being delayed.

Brian McConnachie QC, defending Campbell, said his client had “received a warning that there is a price on his head”.

Granting the application, Lord Matthews said: “I can’t think of a case in recent times that has attracted such revulsion.

“I intend to grant the application. The press may name the accused and publish images of him.”