Charities have credited a regional publisher’s campaign with prompting government action on the number of military veterans taking their own lives.

The Ministry of Defence has detailed a substantial action plan to better understand suicides among ex-service personnel in the wake of an investigation run by JPIMedia titles across the UK.

Last year a probe by the central investigations team of JPIMedia forerunner Johnston Press found there are no comprehensive official records kept of the number of British ex-servicemen and women taking their own lives.

The resulting Veterans in Crisis campaign pressured the government to take action, and a study announced in October into deaths among veterans who served between 2001 and 2014 is now to be expanded to include more recent service leavers. 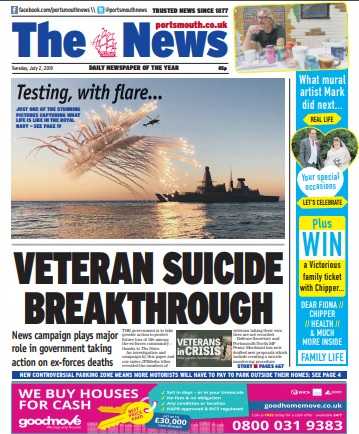 Portsmouth daily The News splashed on the campaign’s breakthrough yesterday

It will be updated on an ongoing basis to provide near-real time monitoring of suicides, while a further study into ex-service personnel who take their own lives will look at risk factors in the year leading up to a suicide.

In addition, the 2021 census will collect data on service history for the first time to build a clear picture of the UK’s veteran population.

Robert McCartney, of Northern Ireland-based charity Beyond the Battlefield, said the Veterans in Crisis campaign could take “huge credit” for the developments.

He said: “Nothing was happening on this issue before the JPIMedia series shone a spotlight on them.

“It was clear that the publicity put panic into everyone. Before that I had met with three or four senior MoD ministers and there was no movement. But afterward, the ideas that had been discarded due to expense were taken out and progressed.”

He said: “The study will help to determine the incidence of suicide and shed light on what has been going on in this sensitive area.

“Additionally the promise that suicides in the military and veteran population will be monitored going forward is a massive step forward.”

Claire Wilde, news editor for JPIMedia Investigations, said: “We are pleased to have seen the announcements from the Government following the launch of the JPIMedia investigations team’s ‘Veterans in Crisis’ campaign and investigation last year.

“Examples such as this show that when journalists across our titles collaborate, they are able to produce investigations of huge public interest that push to bring about genuine change.

“It is great to have seen charities crediting our campaign for these early breakthrough measures, and we will continue to work hard pushing for action to prevent further military veterans taking their own lives.”