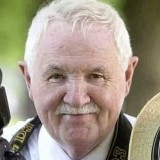 Political leaders have paid tribute to a regional photographer hailed as “one of life’s gentlemen” after his death aged 71.

John Kelly, left, provided photographs to many publications including the Belfast Telegraph, Belfast News Letter and the Lisburn Star.

He was also known as Northern Ireland correspondent for specialist publication the Piping Press.

Mrs Foster said: “I am just so shocked and saddened to hear about John Kelly’s death. I was with him last Tuesday evening at the Burns Night event organised by the Ulster-Scots agency.

“He was in such good form, joking and making sure he got the photo that he wanted. He and I always had a special bond as he shared his name with my own father; we joked that I would never forget his name.

“To his family may I pass on my deepest sympathy and prayerful support, and just say he was one of life’s gentlemen.”

Mr Swann added: “Piping and photography has lost a great champion with the passing of John Kelly. My thoughts and prayers are with his family.”

A former engineer, John had turned to photography and church history after retiring. He died on Saturday following a short illness.

Piping Press editor Robert Wallace said: ‘I was shocked to hear the news, to say the least. John will be sorely, sorely missed.

“He loved the music, the bands and the Northern Ireland branch, and did a huge amount for the pipe band movement in general.

“His death is a tremendous loss to pipe band journalism and to Northern Ireland.”