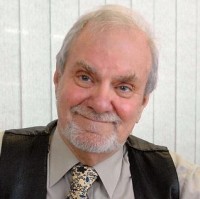 A former regional editor who continued working as a journalist until just last year has died aged 77.

Tributes have been paid to Terry Gilder, left, who edited titles including the Mid Wales, South Shropshire and North Shropshire Journals, as well as the Newport & Market Drayton Advertiser, during his career.

Terry moved to the Northern Echo in 1992, where he worked as a sub-editor, but the following year switched to the nearby Teesside Gazette, where he was launch editor for its nostalgia magazine Remember When.

After nine years in Middlesbrough, he moved to the Staffordshire Newsletter, where he edited the Nostalgia Notebook, which later became known as Times Gone By, and undertook sub-editing duties until 2018.

Terry died on 4 July following a short illness, just a month after his 77th birthday.

His funeral will take place at Hadley Methodist Church, Telford, tomorrow at 12.30pm.

A post from the Advertiser’s official Twitter account described him as “a fine journalist with a keen eye for a story” who “always believed in serving the local community.”

Local democracy reporter Kerry Ashdown, who wrote Terry’s obituary for the Newsletter, further described him as a “colleague, mentor and friend.”

Originally from Stapleford, near Nottingham, Terry had trained as an accountant when e noticed an advert for a trainee reporter at the nearby Ilkeston Advertiser.

He was one of the first intake for the National Council for the Training of Journalists’ certificate and after his time at Ilkeston he went to the Nottingham Evening Post, where he became a court reporter.

Kerry’s obituary adds: “The first story he sold to the national press was about a prostitute in Nottinghamshire who was paid for her services but refused to give them. It was snapped up by the now defunct News of the World for £30 – a week’s wages at the time.

“At the Nottingham Evening Post he also trained as a sub editor (responsible for laying out stories and pictures on a page and checking the copy is accurate and legally sound), before moving to the Shropshire Star.”

Terry took up his first editorship after four years at the Star.

Away from journalism, he published 20 books through his own business, Gildertext, which included local histories by other writers.