A regional daily has revealed the location of the new centre office it is due to move to next year after 50 years in an out-of-town location.

The South Wales Argus is moving to the offices section of the Chartist Tower development, in Upper Dock Street, Newport, in the spring.

The Argus left its old High Street headquarters half a century ago, but revealed last year it was planning a return to the centre of Newport.

Planning permission has been granted to bulldoze the newspaper’s current Maesglas office in order to make way for a new Lidl supermarket. 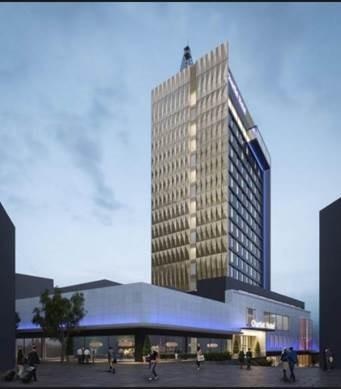 An artist’s impression of the Chartist Tower development

The Chartist Tower building is currently undergoing a multi-million pound refurbishment, which will create a 150-bedroom Mercure Hotel, as well as 30,000 sq ft of office space and 18,000 sq ft of retail space.

Argus editor Nicole Garnon said: “This is great move for the South Wales Argus, to be back in the centre of Newport.

“But it is also great news for Newport, as it will bring a significant number of key Newsquest staff right into the city centre. We are very much looking forward to it.”