A regional daily has published a moving front page tribute to the two victims of Friday’s terror attack in London Bridge.

Cambridge University graduates Jack Merritt and Saskia Jones were killed in the knife attack by convicted terrorist Usman Khan, who was later shot dead by police.

Both had been attending a prisoner rehabilitation conference on Friday when they were stabbed by Khan, who was also attending the event.

Today’s Cambridge News paid tribute to the two victims who, in the words of the paper’s front page headline, ‘tried to make the world a better place’ 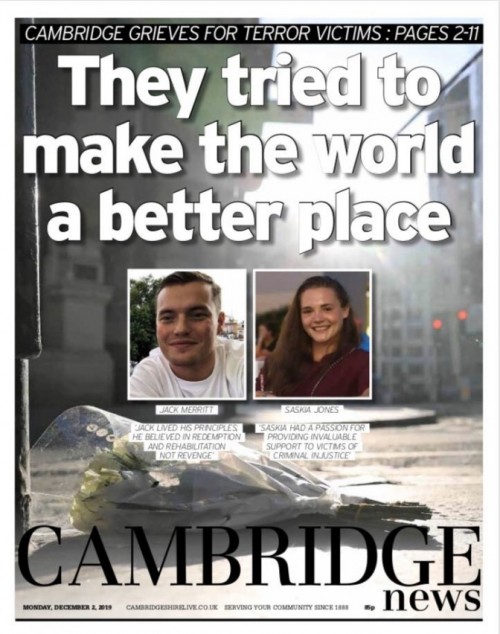 Editor David Bartlett posted on Twitter: “Jack Merritt grew up just a couple of miles from our office. Saskia Jones made our city her home for a number of years.

“I hope our @Cambslive front page tomorrow reflects Jack and Saskia’s lives as their friends and families knew them.”

David told HTFP: “As I said on Twitter when we were putting today’s front page together we had Jack and Saskia’s family and friends in mind.

“Both Jack and Saskia were dedicated to improving lives for other people and we felt that this was the tone that should be taken.

“Cambridge is a small tight knit city where community connections run deep, as the local paper we are keenly aware of our responsibility and duty to be true to those values, and hope that our front page demonstrates this.”