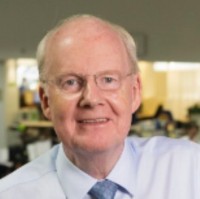 A regional daily’s owner has agreed to be sold to a Belgian media company for €145.6m.

The board of Independent News and Media has unanimously recommended the offer from Mediahuis, which is conditional on acceptance by shareholders.

INM owns the Belfast Telegraph and its sister title Sunday Life, as well as a number of national and regional newspapers in the Republic of Ireland.

The two biggest shareholders in INM currently are Denis O’Brien, widely regarded as Ireland’s richest man, and Dermot Desmond, who is also the majority shareholder of Celtic FC.

In its story, the Independent said: “INM shareholders will be circulated details of a proposed scheme of arrangement for the sale of the business within 28 days,

“The circulation of documents will be followed by a special shareholder meeting but the date of the emergency general meeting (EGM) where shareholders will vote on the proposal has yet to be determined.”

Independent News & Media chairman Murdoch MacLennan, pictured, told the Independent: “We didn’t put the company up for sale, they have made a cash offer for the business.”

He further described Mediahuis as a “top of its class” and as committed to maintaining editorial independence.

Mediahuis publishes major newspaper titles, including De Telegraaf and NRC Handelsblad, in the Netherlands, and De Standaard and Het Nieuwsblad, in Belgium.

Its offices are located in Antwerp, Brussels, Hasselt, Amsterdam and Sittard.

Gert Ysebaert, CEO of Mediahuis, said: “We believe that there is a clear rationale for the acquisition and that INM will thrive under Mediahuis’ ownership.

“Furthermore, Mediahuis can contribute the relevant experience, skills and resources to invest in INM’s brands and significantly enhance its operational and digital capabilities.

“Underpinned by our unreserved belief in independent and quality journalism, we are optimistic about the combination of Mediahuis and INM and its potential contribution to the Irish media landscape.”