A regional daily has changed its name for the first time in 145 years to celebrate a pop star’s homecoming concerts.

The East Anglian Daily Times will tomorrow become the Ed Sheeran Daily Times to coincide with four gigs being played by the Suffolk-raised singer in Chantry Park, Ipswich.

The switch will be made for one day only, and the special souvenir edition will be available from an online store or by phone.

Editor Brad Jones said the concerts had been “long-awaited” in Suffolk. 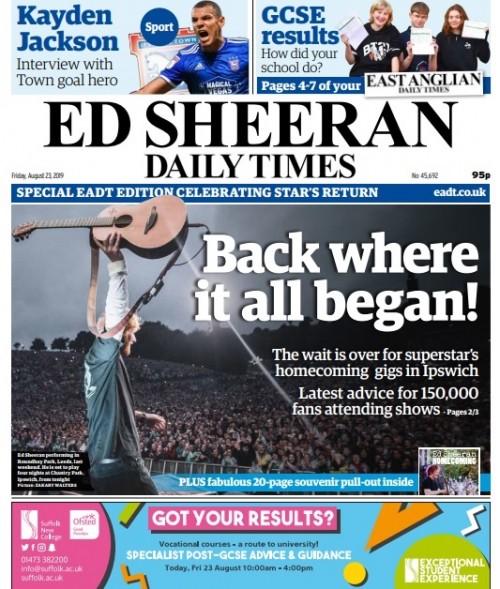 He added: “They come at the end of his record-breaking Divide tour, and there will be a party atmosphere.

“We’ve been covering Ed since the early days, when he was gigging in local pubs, and nobody else will have covered his journey as we have. It’s been remarkable to document his rise to becoming one of the biggest music stars in the world.

“So we wanted to do something special to mark these concerts.

“Not only are we having a bit of fun with the masthead, we’ve produced a fabulous 20-page pullout telling his Suffolk story. We’ve also interviewed some of the key people who were part of his journey.”

The Ipswich-based EADT has also contributed to the Ed Sheeran: Made in Suffolk exhibition, which opened this week at Christchurch Mansion in Ipswich and will continue until next May.

Curated by Ed’s father John, the free exhibition is an intimate look at Ed’s upbringing in Framlingham, school life and career.

The EADT and Ipswich Star has provided press cuttings for the event, and created a video featuring pictures and stories from the last 11 years.