Readers have backed a weekly newspaper’s bid to bring three Hollywood actor brothers to the town whose name they bear.

The Hemsworth and South Elmsall Express is aiming to bring film stars Chris, Liam and Luke Hemsworth to its patch after what began as an “office joke” evolved into a fully-fledged campaign.

The Express has invited the Australian-born siblings to Hemsworth, saying a visit could boost the profile of the Yorkshire town.

The paper is yet to hear from Thor star Chris, Hunger Games star Liam or Neighbours star Luke – but readers have backed the campaign, which provided a splash for the Express, pictured. 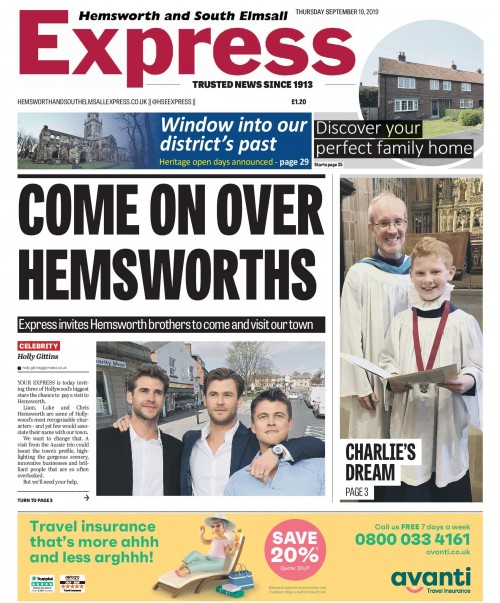 Express reporter Holly Gittins told HTFP: “The story started as a joke in the office a few weeks ago, and somehow, within a few hours, had evolved into a front page splash. The response has been fantastic.

“We’ve had dozens of people chiming in to tell us where they’d take Hemsworths – and where they wouldn’t. So far, they’re on track to receive a lot of free food and drink if, or when, they make an appearance.

“I’m not sure all of our readers are taking it seriously, but I think we’ve really got something going. It’s a crazy idea, but it’s exactly the sort of thing that could take off. Hemsworth is a wonderful little town and if this campaign helps to raise its profile even a little, I’d say it was worth it.

“If nothing else, we’ve had a good laugh, and reminded our readers that we’re not just faceless reporters.”

Holly added a follow-up campaign was already in the offing – a bid to get Chris Hemsworth’s Thor co-star Tom Hiddlestone to the village of Crigglestone, near Wakefield.

She said: “With a bit of creativity, I reckon we could find a town or village in Wakefield for every member of the Marvel Cinematic Universe cast to visit.”