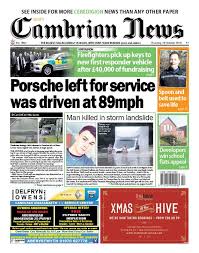 An independent publisher has axed 17 full-time and nine part-time roles after moving its advertising production operations to a central hub.

Tindle Newspapers has decided to centralise all ad production work at a new hub in Devon.

The group said that as a result 17 full-time roles and nine part-time roles hade been made redundant, with one staff member transferring across to the new ad production hub.

No editorial roles have been affected by the changes.

Nine of the roles were previously based at the Cambrian News in Aberystwyth while the rest were spread across various Tindle publishing centres.

In a statement about the Cambrian News job losses, the company attributed the move to “ongoing economic pressure in the newspaper industry.”

It stated:  “Advert production work at the Cambrian News has been centralised, with the loss of nine full and part-time roles.

“The decision has been taken due to ongoing economic pressure in the newspaper industry.

“The Cambrian News continues to have its base in Aberystwyth, plus a district office in Porthmadog.

“The focus is still very much on Cambrian News being locally based, offering a local news service and local service to advertisers.

“As the biggest-selling weekly newspaper in Wales, the Cambrian News prides itself on providing an unrivalled service in the five counties of Ceredigion, Gwynedd, Montgomeryshire, north Carmarthenshire and north Pembrokeshire.

“These adjustments to the business will ensure that the Cambrian News is in the best position to ensure long-term success.”