A regional has prompted an investigation after finding a pair of scissors in a punnet of grapes.

Bristol Live content editor Briana Millett was shopping at a Sainsbury’s supermarket when she found the contaminated packet.

Brianna had found the 500g packet of black seedless grapes in the reduced section of the shop.

Sainsbury’s has confirmed it is investigating how the scissors ended up in the packet. 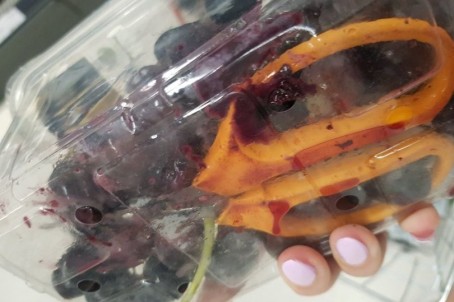 Brianna told Bristol Live: “The grapes were reduced to 30p, so I picked them up and put them in my basket.

“It was only later I realised some of them looked quite squashed, so I turned the packet over to have a look and saw a large pair of scissors inside the plastic tub.

“I handed them in to customer services, as I didn’t like the thought of rusting scissors contaminating my food or someone else picking them up and buying them without realising. The guy behind the counter just seemed bemused as to how they’d got there and put them to one side.

“It seems like quite the health and safety breach, for a foreign object to be packaged up in the food.”

A Sainsbury’s spokesperson said: “Cases like this are extremely rare.

“We have strict checks in place to prevent this from happening and are investigating with our supplier.”