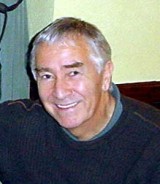 A “positive and charismatic” former chairman of the world’s oldest press club has died aged 74.

Tributes have been paid to Anthony Hayes, left, who held the post at the Birmingham Press Club between 1988 and 1990.

Anthony worked for the Financial Times for many years, including a stint as area advertising sales managers in its Birmingham office before the branch closed.

Orphaned as a teenager, he had spent time in the Royal Navy, trained as an electrician and worked in banking before joining the FT in 1976.

Anthony later became a self-employed sales and marketing consultant, continuing to work for the FT until he took early retirement to pursue his dream of writing a book.

He wrote and had published two books both drawing on his experiences in the navy, and was in the middle of his third when he passed away.

During this time as club chairman he helped organise many events including a number of successful celebrity lunches, which helped raise organisation’s profile.

In his spare time Anthony devoted time to raising money for charity through his involvement with the Lions Club and was a founder member and chairman of the Birmingham Centennial Lions.

Former Press Club director Beryl Williams, who was assistant secretary of the Press Club when Anthony was chairman, said: “He was a positive, charismatic fun loving man who was highly regarded by his colleagues.

“He will be deeply missed by his family and all who knew him.”

Anthony died in Good Hope Hospital, Sutton Coldfield,last month, having been diagnosed with both mesothelioma and acute myeloid leukaemia in May of last year.

He is survived by Monica, his wife of nearly 50 years, daughters Esther and Laura and grandchildren Dylan, Oscar and Noah.

All are welcome to his funeral, which will be held at 11am tomorrow at St Anne’s Catholic Church, Bridle Lane, Streetly, followed by cremation at Streetly Crematorium at 12.15.