Photographer’s surprise as he covers own award presentation

A regional daily photographer got a pleasant surprise when he turned up to cover an awards presentation at which he turned out to be the recipient.

Shropshire Star photographer Steve Leath was told to cover the presentation, which was being made by Telford & Wrekin’s mayor Raj Mehta at the newspaper’s offices.

But when he arrived for the job, Steve found out it was he who would be receiving one of the mayor’s community awards in recognition of his “going the extra mile” in his work.

The award was officially presented to Steve for his “outstanding contribution and commitment with the Shropshire Star and wider community”. 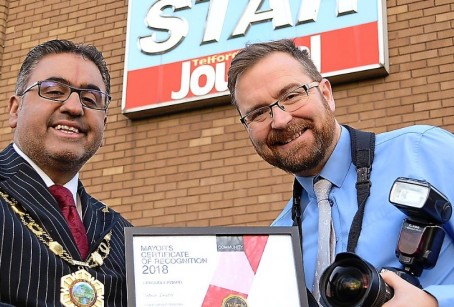 Steve, who has been doing his current job for 14 years, said: “I was told that I would be doing a certificate presentation. I didn’t realise it was for me. I’ve never been given a certificate before.

“I’m going to have to think about where to keep it, but I think I may have it in my dining room on the cabinet.

“Sometimes in this job I end up doing a lot of hours and it’s because you don’t want to let people down. You hope it is appreciated, and this shows that it is.”

Cllr Mehta said: “Ever since I became mayor I have wanted to make sure the gems of the community are not missed and the efforts of people are recognised.

“Whenever I have met him I have been struck by his politeness and humbleness, and his going the extra mile and out of his way. He is not just there as a photographer – he looks after everything and everyone.

“It’s very hard to find somebody who has those qualities all in one. And it’s without wanting something back.

“I noticed that, and that’s the key. He is the first journalist to receive this award.”