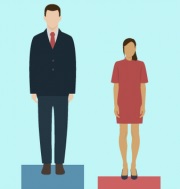 The company has published its gender pay gap report for 2018 together with fellow publishers the Midland News Association and Reach plc.

The figures show that women earn both a higher mean and median hourly rate of pay than men at Newsquest, at 11pc and 82pc higher respectively.

However, men earned higher rates than women at all of the other companies required to publish their gender pay gap.

JPIMedia, which did not exist in April last year, did not publish figures.

Prior to going into administration, JPI’s predecessor Johnston Press had pledged to make sure half of its senior staff were female in a bid to address gender imbalance at the company.

Last year’s figures revealed Newsquest-owned NWN had been the only local newspaper company that had recorded women earning a higher mean hourly rate.

This year, NWN’s figures were included as part of Newsquest’s overall statistics.

The full figures are as follows: