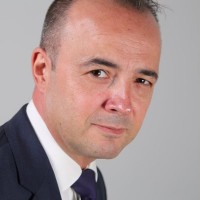 Newsquest has threatened the Liberal Democrats with an election news blackout over what it called an “outrageous” bid to pass off a campaign pamphlet as a local newspaper.

As reported by HTFP, Basingstoke Gazette editor Katie French criticised the party after it published a “free newspaper” with a similar name to one of its titles.

The party has defended the publication – entitled the Mid Hampshire Gazette – which had been produced in support of its candidate for Winchester Paula Ferguson.

But, posting on Twitter, Newsquest editorial director Toby Granville, pictured, branded the move “outrageous” and demanded the pamphlet was pulled from circulation.

He wrote: “This is outrageous [Lib Dems], passing yourselves off as the Gazette newspaper in same area as our Basingstoke Gazette.

“If this isn’t pulled I’ll advise all Newsquest editors not to publish any campaign news for your party in build-up to #GE2019.”

The company has since made an official complaint in a letter to the Lib Dems’ legal department, a copy of which has also been sent to the Electoral Commission.

It calls on the Lib Dems to cease publication of the Mid Hampshire Gazette immediately, destroy any remaining copies, and issue a public apology.

The letter states: “The publication flagrantly mimics for partisan political purposes the name, style, layout and content of an independent local newspaper.

“It is our belief that it is intended to mislead in an attempt to pass it off in the minds of readers as having an association with our own title or another independent newspaper.

“Newsquest Media Group does not authorise, sponsor, endorse or approve any Liberal Democrats’ publications.  Indeed, its stated public stance at election time is one of editorial impartiality.

“Your publication therefore casts damaging and false imputations on Newsquest Media Group’s editorial independence and seriously undermines the relationship of trust and confidence between readers and local newspapers generally.”

A Liberal Democrat spokesperson responded to Toby’s comments by mistakenly describing him as the “Basingstoke editor.”

The spokesperson told HTFP: “This is the Basingstoke editor complaining about something that was not distributed anywhere near his circulation area.

“As far as we know he has not contacted us directly and we will be happy to talk with him about this if he does.

“In the meantime, we remain committed to communicating with people, and tabloid newspapers has been one way of doing this employed by all political parties for decades.”

The News Media Association and Society of Editors have also criticised political parties for “dressing up” their material as independent journalism.

The NMA said: “Political parties should not be seeking to copy the look and feel of independent local newspapers with their campaign material.

“By scrutinising candidates on behalf of the public in communities across the UK, local news brands play a vital role in upholding democracy. Dressing up party political material as independent journalism undermines this and damages trust in both news media and politicians.”

Ian Murray, executive director of the Society of Editors, added: “It is ironic how it is often politicians who complain about fake news but then set out to at least blur the lines for readers – and in this case voters – by packaging their partial messages to ape independent newspapers.

“If political parties were genuine in their desire, often expressed, to both remove the effects of fake news and disinformation as well as support existing regional and local media they would take steps to ensure their political freesheets look markedly different to real newspapers.”

JPIMedia editor-in-chief Jeremy Clifford and Yorkshire Post editor James Mitchinson have also spoken out about the practice after another Lib Dem publication surfaced in Yorkshire.

Jeremy wrote on Twitter: “In an age of fake news, this is outrageous and the media should take a stand against this practice.”

James cited a publication produced by the party which is circulating on his patch called the North West Leeds & Wharfedale News.

He said: “Dear people of North West Leeds and Wharfedale: this isn’t ‘news’ as the masthead suggests. It’s political propaganda imitating local newspapers in order to borrow the trusting relationships that titles like ours in this region have worked so hard to build up with you. #FakeNews” 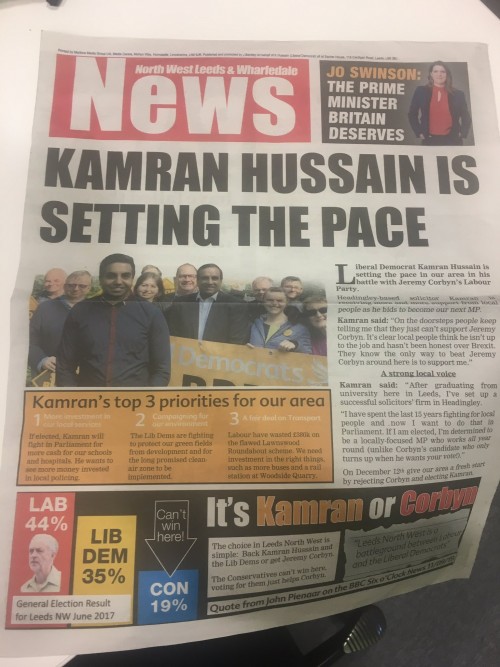