Mystery surrounds the discovery of a canvas bag bearing the name of a weekly newspaper which has washed up on the west coast of America.

The canvas bag, which features Folkestone Herald branding, was found on a beach in Oregon, USA.

The bag, which is at least three years old, was discovered by Jim Gallagher and his wife Chris while beachcombing in the town of Gold Beach on 2 January.

Unless it was dropped on the beach or from a passing vessel, it would have had to have travelled between 9,000-15,000 miles by sea to have reached the west coast of America. 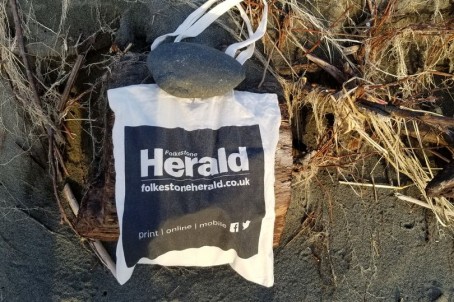 The bags had previously been sold across Folkestone as part of promotional packs, but this was stopped in December 2015.

The Gallaghers, originally from California, retired to Gold Beach three years ago.

Mr Gallagher told the Herald’s sister website Kent Live: “My wife Chris and myself were gathering driftwood for a project, which we do quite often.

“We haven’t found much in the way of exotics, personally, while walking our beaches, but our coastline received quite a lot of flotsam from the tsunami in Fukushima, Japan, up to intact fishing boats.”

In order to reach Gold Beach, the bag would either have had to have travelled  north past Greenland and west beyond Canada and Alaska a journey of some 9,000 miles.

Alternatively, it could have made the 15,000-mile journey south around Tierra del Fuego and then north, up past Mexico and California, before washing up on Oregon’s shores.

It is not the first time that a piece of UK local newspaper ephemera has been found in a faraway place.

HTFP reported in 2015 how a seven-year-old girl in France had discovered balloons bearing the logo of independent weekly the Times of Tunbridge Wells, which had been released almost 200 miles away over the English Channel.