The mother of a murdered baby who a daily fought to name has thanked its readers for their support after the child’s father was brought to justice.

Andreea Stefan said thank you in a Facebook post to readers of Newcastle daily The Chronicle who had wished her well following the death of her newborn son Andrei at the hands of her partner Denis Beytula.

HTFP reported last month how The Chronicle had won the right to posthumously name baby Andrei, who had been protected by a court order as he fought for life in hospital, in order to keep the public informed of what was happening in the case.

Beytula, 27, pleaded guilty at Newcastle Crown Court on Thursday to the murder of the three-week-old boy and the attempted murder of 21-year-old Ms Stefan following a double stabbing at their home in Wallsend on 2 October. 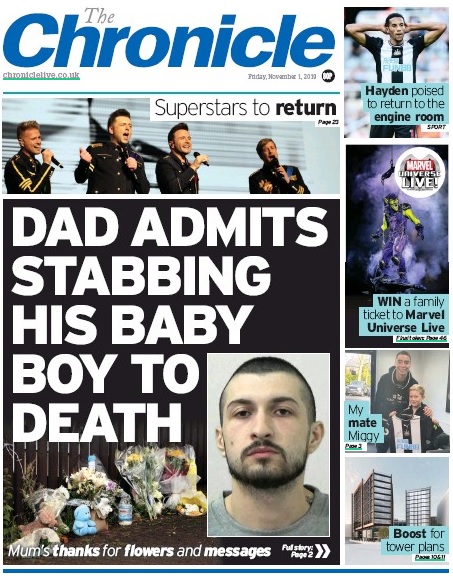 In a post on The Chronicle’s Facebook page, Ms Stefan, who is originally from Romania, wrote: “I would like to take this opportunity to thank to everyone who came to leave flowers and toys and paid respect to my son, in front of my house.

“I really appreciate it and thanks to everyone for the messages, it’s really nice to see how you guys support me and my family during this hard time .

“May God give to everyone what they deserve. Thanks to all of you again.”

The court heard there was a “background of domestic violence, broadly speaking to this offence”, although full details were not outlined at the plea hearing.

Beytula’s barrister described the relationship as “turbulent” but Judge Penny Moreland said: “There’s a difference between a turbulent relationship and a coercive relationship [Ms Stefan] describes.”

Beytula will be sentenced on 19 December.

Chronicle crime reporter Sophie Doughty told HTFP: “The murder of baby Andrei Stefan horrified everyone, and soon after we first reported on the stabbing our readers used our Facebook page to send messages of support to his mum Andreea.

“So when she commented on one of our stories, to say ‘thank you’, it was touching to see that she had found some comfort from the support she has received during this terrible time.

“And our readers responded again by praising her courage and sending her more good wishes.

“The murder of three-week-old Andrei is among the most shocking crimes we have covered at the Chronicle, but it was heartening to see that the response our coverage generated in the community was appreciated by Andreea.”