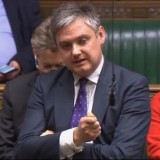 An MP has attacked health chiefs in Parliament for “refusing” to give information to a regional daily investigating serious allegations of failings which it is claimed led to two patients’ deaths.

John Woodcock has hit out at the University Hospitals of Morecambe Bay NHS Foundation Trust over its Freedom of Information policy after South Cumbria daily The Mail conducted a lengthy investigation about concerns over its urology department.

The Mail’s investigation over the last seven months has focused on concerns flagged up by Peter Duffy, a former urology with the trust who quit his role in 2016 after claiming his concerns about three of his colleagues had not been properly looked into.

Independent Barrow MP Mr Woodcock, pictured, was made aware of a series of failings, including two which allegedly led to the avoidable deaths of patients Irene Erhart and Peter Read, following the newspaper’s probe.

Speaking in Parliament, Mr Woodcock praised Mail reporter Amy Fenton and said: “It is right that these allegations are treated fairly and without prejudice to either side, but what is not right is the way that the trust is seemingly not learning the lessons of transparency.

“It is refusing FoI requests made by our brilliant local newspaper, which has led the way on this matter. We all owe a debt of thanks to Amy Fenton, a reporter who is just not taking no for an answer.

“She is being told time and again that she cannot have information from the trust. The Health Secretary must look at this, and I hope that he will come back to us when the House comes back in September.”

After Mr Woodcock’s speech, Mr Duffy, who has written a book about his experiences, told The Mail: “I am very grateful to John Woodcock MP and Amy Fenton, investigative journalist from The Mail for bringing this situation to the public attention.

“Avoidable deaths and avoidable harm will never be completely eliminated from medical and surgical practice.

“However, it is vital that mistakes are acknowledged and learned from rather than hidden, so that we can safeguard future patients from similar errors and continue to improve our service.”

The trust last week apologised to the two families and insisted lessons have been learned.

Trust chief executive Aaron Cummins told HTFP: “We have, over a number of years, been dealing with the issues raised by patients, and colleagues including Mr Duffy, about the urology department. This culminated in 2016, when we invited the Royal College of Surgeons to carry out a review of the department.

“We have implemented the actions they recommended, and in the autumn we will be undertaking a peer review of the department by expert clinicians from another Trust to ensure that the actions have been fully embedded and ensure nothing further is required.

“Our trust has a long memory and we have and will continue to learn the lessons from our past. As an organisation we promote whistleblowing – raising concerns is an important part of being able to learn, grow and improve our services.

“No-one need fear speaking out in our trust, and this is why we share our learning from our past mistakes with every new member of staff at their induction and encourage them to speak up if they have any concerns about any aspect of our services.

“Redactions to FoIs are made to fully comply with the law and ensure patient confidentiality – however we will review our responses to ensure we provide openness without jeopardising the confidentiality we have to maintain for our patients. We have on previous occasions met and discussed these issues with Amy Fenton, and have offered to meet with and discuss any aspect of this issue with John Woodcock, who is a valued local MP.

“We will read Mr Duffy’s book and take any additional action necessary to continue to ensure our services are safe for our patients.”