More than 1,300 to get water safety help thanks to daily’s memorial campaign

More than 1,300 children will receive swimming and water safety lessons as a result of a regional daily’s memorial campaign for a boy who drowned.

HTFP reported last August how The Sentinel had launched its Swim Safer campaign which had been backed by the family of 13-year-old Ryan Evans, who died the previous month while swimming in a lake.

The campaign has been backed by Stoke-on-Trent City Council, Staffordshire Fire and Rescue Service, Staffordshire Police and The Royal Life Saving Society. 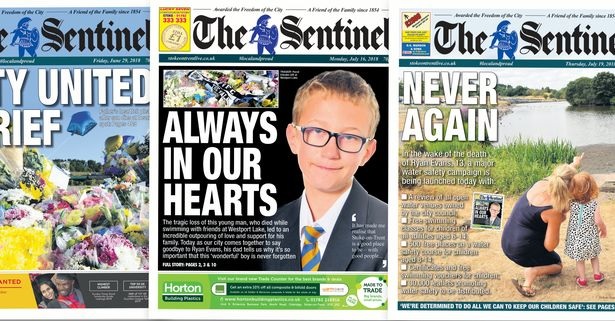 How The Sentinel has covered its campaign

Martin Tideswell, editor of The Sentinel and its Stoke-on-Trent Live sister website, said: “The heartbreaking loss of Ryan brought the whole city together and there was a real sense that something positive had to come out of an awful tragedy.

“That so many youngsters are receiving water safety training and advice means there is a genuine legacy for Ryan and I am grateful to the city council for continuing to fund and organise the Swim Safer sessions.”

Ryan’s father Glynn, who has backed the campaign, told The Sentinel: “If Swim Safer can save at least one child’s life and stops any other parents from getting that dreaded knock on the door like we did, then Ryan’s life was not lost in vain.”