The Manchester Evening News is set to go to print seven days a week as it prepares to launch a Sunday edition.

The newspaper has announced the M.E.N on Sunday will launch next month with a focus on “investigations, political coverage and powerful social journalism”.

And there will be new jobs up for grabs with the newspaper increasing its sports team from 11 to 14 members to coincide with the launch. 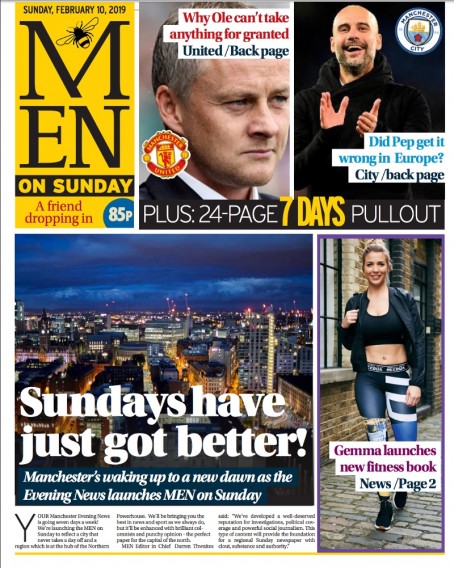 The first M.E.N on Sunday will go on sale on 10 February with a cover price of 85p.

It is the second big-city title in Reach’s regional portfolio to move to a seven-day operation following the successful launch of the Liverpoo Echo’s Sunday edition in 2014.

MEN editor in chief Darren Thwaites said: “We’ve developed a well-deserved reputation for investigations, political coverage and powerful social journalism. This type of content will provide the foundation for a regional Sunday newspaper with clout, substance and authority.”

“We already produce fantastic weekend content and reach a massive audience online. It’s a natural extension to package the best of everything into a quality Sunday print edition for those who still enjoy the experience of browsing through a newspaper.

“With national politics covered almost exclusively by London-based writers, we have the opportunity to drive the Northern political agenda from here in Manchester.

“The M.E.N on Sunday will also provide the most in-depth and informed reporting of Manchester United and Manchester City. We have a brilliant group of journalists all passionate about Manchester – and we’re thrilled to have the opportunity to extend our portfolio.”

“The launch of MEN on Sunday reinforces our commitment to Manchester and the wider region and builds further on the strength and success already being delivered in having the largest audience in regional press in the UK and one which continues to grow.

“We believe Manchester deserves its own Sunday newspaper and we are delighted we are able to provide it.”

In addition to the Liverpool Echo’s Sunday edition, four of Reach’s other big-city centres publish separate Sunday titles – the Sunday Mercury in Birmingham, the Sunday Sun in Newcastle, Wales on Sunday in Cardiff and the Sunday Mail in Glasgow.

A Sunday edition of the Plymouth-based Western Morning News was launched by Local World in June 2014 but closed by Reach predecessor Trinity Mirror in January 2016 after it bought the company.